The most important meal of the day! 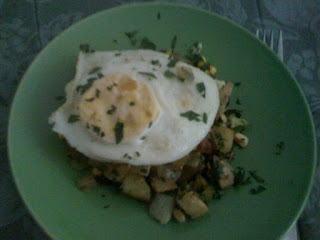 Breakfast is something that I definitely had to grow into. As a child, I avoided it at all costs especially during the week. On weekends or during the summer I could be coaxed into a bowl of cereal or a soft boiled egg. Occasionally Mom would fool me with a "bunny shaped" pancake. I say fool because the actual pancake was more like an oddly shaped blob. But she had this way of showing it to me really quickly so I saw what I thought were ears and then she'd cut it up right away and cover it with butter and syrup so I never knew any better. Hey - if Mom said it was a bunny who was I to argue with her? She's my Mom. She wouldn't lie to me right?

Anyway....let's save the therapy session for another time. As I got older I began to enjoy breakfast more. For whatever reason I had issues eating in restaurants as a child - it made me nervous and I would usually work myself up into such a state that I couldn't eat there and would take my entire meal untouched to go. The minute we got in the car I'd be ravenous and devour it with my hands. To allow themselves one stress free meal while we were on family vacations, my parents would go to breakfast and leave me in the room either sleeping late or watching TV (seriously looking back on this someone probably would call Child Services now knowing there's a 7 year old in a hotel room alone....). But I loved it. I'd watch cartoons, day dream about being a pirate, a princess, an astronaut....whatever struck my fancy. And then the door would open and Mom and Dad would come in with a Styrofoam container (this was before the green movement took hold) filled with scrambled eggs, sausage, bacon and buttered toast (this was also obviously before we feared the impacts of cholesterol, saturated fats and heart disease....). I'd sit at the little table in whatever generic hotel room we were in and tuck into my rapidly cooling breakfast enjoying every savory mouthful.
Now as an adult, breakfast is my favorite meal to eat out and one of my least favorite to prepare. Something about the timing of it frustrates me to no end. Last weekend I invited friends over for breakfast and I ended up serving them cold eggs and burned toast. See - even I have the occasional off day. Of course, I had just sent my beloved Bobby Bacala into that great litter box in the sky the day before so I wasn't feeling up to my usual self. But getting the toast and the eggs and the sides to the table all piping hot (or cold depending on the side) is something for the most part that escapes me.
However - once in a while it all comes together. This morning while making my coffee and considering a breakfast of chocolate cheerios with a banana, I noticed a bag of Yukon gold potatoes in the fridge sitting next to a bulb of fennel. I had a flash of inspiration and knew immediately what I wanted - a potato hash. I grabbed the potatoes, the fennel, an onion, an apple and a leftover cooked ear of corn. I chopped everything up into a small dice and sauteed the onion and fennel with a clove of garlic in a bit of olive oil. Then added the potatoes and let them everything begin to caramelize. Lots of salt and pepper and a bit of dried thyme to bring out the flavors. Near the end I tossed in the apples and corn and let it all heat through. When it was ready I turned off the heat, added a handful of chopped parsley and some fresh black pepper. A recent acquisition of a beautiful nonstick omelet pan allowed me to cook up a perfect over easy egg to top the hash. One last sprinkle of fresh parsley and this breakfast was good to go.
Sitting by my open window, catching the breeze with my perfect breakfast and an iced coffee, I thought back on how food has shaped my life in so many ways. Most of my happiest memories have always centered around either preparing, serving or eating. And now, I realize there are also some life altering moments as well. Those bunny pancakes man....I can't believe she lied to me! Mom - I'm sending you my therapy bills! :-) (Just kidding.....sort of.....)
May all your food experiences be happy ones! Happy Cooking!

Posted by Maryanne at 1:38 PM No comments:

One Last Braise Before the Heat.... 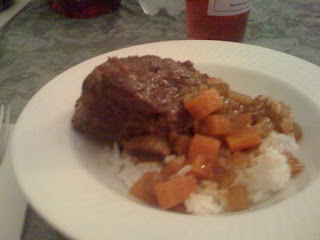 The short rib is one of my favorite cuts of meat. They're short but thick (hmm...maybe a little like me) and have beautiful marbling that runs through them. On a cold wintery day, or even on a rainy spring day, a braised short rib can be perfect for what ails you.
My parents were coming up to spend the night since the next morning was my graduation from the MPA program at Baruch College. Loving to impress my father (which isn't always easily done) I pulled the short ribs out of the freezer. I flipped through cookbooks and searched the Internet looking for a recipe that wouldn't require me to turn on the oven but would result in a stove top braise that would have the tender meat falling off the bone. Unfortunately, I didn't find anything that impressed me. So I improvised.
I started with about 4 lbs of short ribs, sprinkled them liberally with salt and pepper and gave them a light dredge in flour. Then browned the meat in a little vegetable oil on all sides and set it aside. I poured most of the fat out of the pan leaving about one tablespoon. In that fat, I sauteed 2 large carrots and 2 stalks of celery (about 1/4 inch dice) and one large vidalia onion. When that had started to soften I added 3 cloves of sliced garlic and let the mixture sweat a bit until all the vegetables were softened and the onions were just beginning to brown.
To enrich the flavor I added almost an entire can of tomato paste and let that cook with the vegetables a bit. The ribs and any juices went back into the pan along with some fresh thyme and two bay leaves. For the liquid - I wanted something different than a standard red wine braise. I used a bottle of Brooklyn Lager, and a mix of chicken and beef broth just to cover the meat. I brought it up to a simmer and then covered the pot and let it bubble away for about two hours.
After two hours the kitchen, the whole apartment and most of the floor of my building smelled of this beautiful rich meaty saucy scent (apologies to any vegetarians that may live within sniffing distance). I took the lid off, gave the pot a quick stir and then let it bubble for nearly another hour uncovered so that the gravy would reduce down and become thick and rich.
I served the short ribs over a bed of simple white rice (buttered egg noodles or potatoes would work really well here too). The results were exactly what I was looking for. Tender meat that fell off the bone in a rich gravy. Just look at Dad's face here to see what he thought :-) 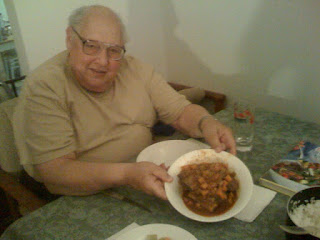 Between the 3 of us we finished off most of the ribs but there was a lot of that beautiful gravy leftover. Not wanting to waste it, I used it to dress a simple pasta supper later in the week. I had a little bit of meat left and shredded it into the gravy and poured it over rotelle pasta with lots of fresh grated pecorino romano and black pepper.
As I sit here typing this I can feel the humidity rising and I can't help but feel a little sad that the season for these heart and house warming meals is definitely at an end. As the temperature rises, I will spend my time making cold soups and salads and avoiding any reason to turn on either my oven or my stove. Baking will come to almost a screeching halt unless I'm visiting my parents and making the most of their central air conditioning. But the bounty of summer veggies and trips to the farmers markets will increase and soon I'll be immersed in the joys of warm weather foods, picnics and grilling whenever the opportunity arises.
So fare thee well cold weather and welcome summer. Happy Eating!