Making friends with the Boyardee Family 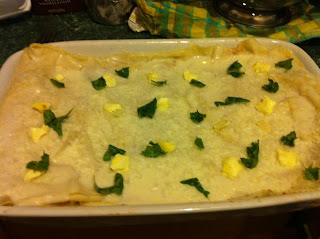 For my birthday back in November, a dear friend got me a gift that really made me question our friendship. It's Anna Boiardi's cookbook, Delicious Memories: Recipes and Stories from the Chef Boyardee Family.  Now it is very well known amongst those who know me well (and not so well) that I abhor Chef Boyardee. The mushy pasta, the brownish tinted sauce, the crumbly meat that reminds you of the mystery meat you probably had in camp or a school cafeteria.... It just doesn't do it for me.


When we were kids, my Mother made dinner every almost every night.  Even once she went back to work when I was about 7, she still came home every day and cooked for us. The exception to this rule was in June, during her extremely busy season preparing for graduation (she worked in a public high school in Brooklyn) we found ourselves eating a LOT of takeout. Chinese, Pizza, Roll N' Roaster (I still dream about those roast beef & cheez sandwiches....) and on occasion, if we were trying to go healthy - there would be some sort of rotisserie chicken (anyone remember when there was a Kenny Roger's Roasters in Sheepshead Bay?). Ah, June was a fun month!

But going back to Mom cooking - my Mother was shopping the exterior of the supermarkets long before it became the fashionable and healthy thing to do. Even if the meal was simple, it was almost always made from natural wholesome ingredients with a protein (roasted chicken, lamb chops, london broil), vegetable and starch of some sort. With the exception of Rice-a-Roni and the deluxe macaroni and cheese (packet of cheese sauce - not the powder...I think somehow the sauce seemed more 'natural' to her) Mom made it all. Frozen TV dinners were almost never allowed in the house, stove top stuffing was unheard of,  and the little Italian man in the hat was NEVER allowed into our shopping carts - ever!

And frankly - why would he be? I've blogged before about the joys of my Mom's Sunday dinners. Gravy simmering slowly on the stove loaded with sausages, meatballs and bracioles. Macaroni cooked to a perfect al dente mixed with just the right amount of gravy (never swimming in it!). Ravioli purchased from Dairy Maid or Pastosa that were both rich and creamy while still feeling light.  Stuffed shells with Mom's homemade filling, Lasagna oozing with meat, ricotta and mozzarella.... Why on earth would anyone eat that stuff that came out of a can? That wasn't Italian food! It was the equivalent of overcooked spaghetti topped with ketchup as far as I was concerned!

But then - there was that one time. Mom and Dad were out and my brother and I went to the grocery store unsupervised. And as we passed through the canned goods aisle we saw that smiling little Chef staring out at us. This was TOTAL contraband and completely disallowed. But what Mom and Dad don't know wouldn't hurt them. I was old enough by that point, probably about 12 or 13 to realize that Mom wasn't always right (just most of the time...love you Mommy....) so maybe she was wrong about this. So many of our friends ate it - and by that point we'd discovered the joys of frozen french bread pizzas, hot pockets and other pre-made delights so maybe this was good too? We slipped a can into our shopping cart, paid for our groceries and raced home.  I stood guard by the door making sure our parents weren't getting home early and my brother heated it up in the microwave. While it was heating I couldn't help but think that it really didn't smell so good...but it was the taste that mattered! We stood, forks in hand, over the steaming bowl of mush...and each stabbed a ravioli and placed it in our mouths and chewed...sort of...because you kinda don't need to chew. And then we both spit it out, dumped the bowl's contents into the trash, got rid of the can and silently vowed never to speak of this again. (There was also one time last summer, when fueled by a rather large amount of vodka, sun and beach that I gave in again and shared a bowl with a friend. That time I don't think I hated it quite so much - but I think at that point it was the sharing with a good friend whose enthusiasm was catching as he waxed nostalgic about his youth, and quite possibly the vodka combined with a near sunstroke that temporarily blocked my gag reflex...).

So fast forward about 20 years to getting this cookbook! I smiled, laughed, took photos and then figured it'd end up on the bottom of my pile - maybe I'd use it to balance a table leg or something. But then I started reading some of the stories about how it all came together. And while I still had that bad ravioli experience in my head I was starting to get into some of the recipes. Many of them are basic and I'd say its a great book for beginner cooks or those new to Italian food. But one recipe stood out to me - the recipe for lasagna. The Boiardi family is from Piacenza in the Emilia Romagnia region of Italy - so the lasagna from there is not the heavy dish I'm used to loaded with ricotta, mozzarella, mini meatballs and sliced sausages and stacked with thick dried noodles parboiled into al dente sublimation and then slavered with a homemade gravy.  The entire tray should weigh no less than 20 lbs. and getting it into and out of the oven requires olympian style strength. This was made with a slow cooked beef bolognese, a creamy bechamel and homemade egg noodles rolled so thin you can practically see through them.

Now I'd been craving fresh pasta for the past week or so. And having once again flipped through the book and landing straight on the lasagna page I figured it was time to tackle it.  So Saturday afternoon I broke out my new Le Creuset dutch oven and made a slow cooked rich bolognese sauce - generally following the outline of Boiardi's recipe but, as always, tailoring it to my own tastes (she makes a point to say they don't use garlic in Piacenza but no way I wasn't including garlic in my gravy). Then on Sunday I broke out my grandfathers hand cranked pasta machine (which by the way, he abhorred much the way I abhor canned pasta products - to him macaroni should be rolled and cut by hand. I, having never been so comfortable with a rolling pin prefer the crank method). I mixed the flour and eggs with a pinch of salt and a dash of water (Anna and I again disagree on the best way to make egg pasta but that's ok...) kneaded till I had a gorgeous small and smooth ball of dough and set it aside to rest. While it rested I made a bechamel and set that aside to thicken.

When it came time to roll out the dough I realized the importance of having a clean kitchen with empty counter tops (which - also having been in the process of experimenting with a couple of Momofuku Milk Bar cookie recipes was most definitely not the case in my kitchen). I managed to finagle open space, lying cleaning kitchen towels anywhere they would fit and began rolling, folding, cutting, rolling again until I had long golden sheets thin enough to see through. I cooked the noodles in a giant pot of salted water and pulled them out after a minute or two, setting them flat on the towels to dry a bit before beginning to layer them in a baking dish with the bolognese, bechamel, grated pecorino and torn fresh basil leaves (Anna doesn't include that but I love the spark of fresh flavor that the bite of basil gives you). I deliberately rolled my pasta longer than the pan so that I wold be able to fold over the tops and get that delightful crispy top that is always my favorite part! One last spread of bechamel, dot with butter, more pecorino cheese and more basil.

I had a friend coming over for dinner that night (no - this wasn't only for me!) so I put it in the oven about 1/2 hour before her arrival and prepared some garlic bread to go with it. The salad I bought stayed in the fridge (leaving more room in our bellies for wine and lasagna consumption). I served each of us a small portion, topped with a little extra bolognese. The verdict? Totally, absolutely worth it. It's certainly not my Mom's lasagna but it definitely has its place in the world! The homemade pasta was light, the bolognese rich and the bechamel delightfully creamy. Over the course of the hour or so that we spent at the table, I noticed that each of us kept going back for just a little bit more...one more thin slice, one more spoon...until nearly half the pan had been consumed. It was so light and yet so comforting and definitely worth the two day process. 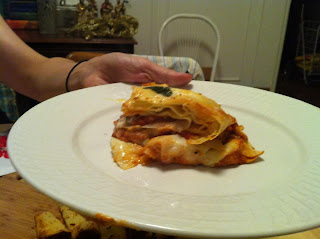 If Boyardee family produced THAT in a can I'd have converted long ago. But for now, I'd say we've come to a comfortable truce. I'll stop wrinkling my nose every time someone mentions the Chef keeping their family recipes in mind and realizing that not everyone has my Mother in their family kitchen.  Please feel free to leave your opinions on the Boyardee saga in the comments section below!

Next up: Look out for a detailed account of the Momofuku cookie experiment later this week!
Posted by Maryanne at 1:51 PM