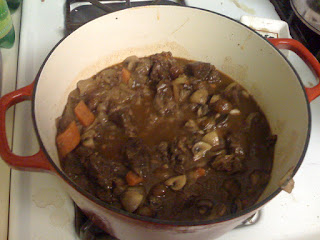 A few years ago, before Meryl Streep so perfectly took on the role of Julia Child, I read the book Julie and Julia and was tempted to make Julia's famous Bouef a la Bourguinonne. Tempted...but not quite ready. Working with ingredients like pearl onions intimidated me and at that point I'm fairly certain my kitchen equipment did not contain anything close to a dutch oven. My other concern with such a dish was that I would have no one to serve it too. If bouef is being made into bourguinonne in a kitchen but no one is around to taste it is it really bourguinonne?

Fast forward to the present. On a cold Saturday afternoon in the land of senior developments otherwise known as southern New Jersey, I asked my father what he wanted for his birthday dinner. Having just seen the movie that past Tuesday (it was senior day at the local theatre which means tickets, soda and popcorn for only $10 - which incidentally still makes my father twitch....) his reply was "beef bourguinonne". He said it so matter-of-factly that I knew he had been thinking about it for a while and a momentary panic set in. Having just seen the movie myself, I immediately conjured up images of burning the casserole and serving dad a pizza for his birthday. I quickly stuffed the fear down and thought to myself if Julie could do it then damn well so could I!

Finally the big weekend arose. I headed down to NJ with my copy of the recipe straight out of Mastering the Art of French Cooking and a lengthy shopping list. First thing on my to do list: buy dutch oven. I have one but Mom doesn't and since I'm cooking at their place we had to procure one quickly. A quick stop at TJ Maxx and after I revived Dad from the $49 cost of the pot, I loaded my wares into the trunk and headed home to prep.

As I sliced onions and garlic and carrots and tried to get my beef into even 2" cubes I had another moment of panic. What if I'm really not good enough to do this? What if it doesn't turn out right? I'm only on step 3 and there are 45 steps in this process. At this point it wasn't so much about my dad's birthday dinner as it was my own pride in the kitchen. I gathered my head and channeled my energy. I browned the bacon (ok so I used pancetta - shoot me for a tiny improvisation) and the beef, softened the veggies, coated everything with flour and toasted it in a high oven for four minutes at a time. I agnoized over the wine choice and finally settled on a Pinot Noir from my parents wine rack. While the casserole was bubbled away in a low oven I prepared the smothered pearl onions and sauteed the mushrooms. As it simmered it started to smell phenomenally good in the house. I peeked at the under the lid of the casserole and thought "I just might pull this off".

By the time evening rolled around and I was on step 37 I began to care less about how it turned out and just wanted to get the damn thing over with. Pour the contents of the casserole into a strainer over a sauce pan. What???? Do you know how heavy that dutch oven is???? Now wash out the casserole and put the meat back in it. What? Why am I washing it out if I'm going to just get it dirty again???? Ok, fine. If Julia says so. Add my smothered onions and mushrooms to the meat. Now simmer the sauce until its just the right consistency to coat the back of a spoon. Ok....two minutes on a high boil. Nope...not coating. Ok, two more minutes...nope...still not coating. AAAGGGHHHH. Two more minutes! FINALLY COATING!!!!! I pull it off the heat, pour it back over the meat and veggies and take the whole thing off the heat to cool so I can put it in the fridge overnight.

Sunday morning in Jersey brought the usual routine of early mass with the parents and breakfast. All I can think of while the priest is giving his sermon is "what happened to the beef?" "What if its not good?" "Can I ever cook again?" Later at breakfast when the waiter asked for my order I almost requested beef borguinon. I was a mess and completely obsessed. Thankfully I was distracted by Sunday afternoon football. Finally the moment of truth came. I heated up the casserole on a low flame and cooked up some noodles to help sop up the sauce. The smell coming from the pot was amazing. Even my Mom who has been severely under the weather these past few weeks came poking into the kitchen. I tossed the noodles with a little butter and fresh pepper, set the table and called in the troops.

Now my dad is a hard one to please food wise. If you make something light he thinks it was too light. If you make something rich he'll want it lighter. If it's sweet he'll say it should be saltier and if its spicy he'll want it bland. There are a few dishes I have prepared for him that have left him without criticism. One is my osso bucco with risotto Milanese. Another was when I made him a quick chicken and vegetable stir fry with a brown sauce of a bunch of different Asian sounding ingredients I had in the fridge that I will never again be able to recreate in its exact original form. I had no idea what he would say about the beef. I sat with baited breath, my own plate steaming up before me tempting me with its rich scent of beef and wine and herbs. He stabbed some noodles with his fork and followed it with some meat and vegetables and placed the fork in his mouth. Through his glasses I could see his eyes begin to twinkle. The corner of his mouth turned up a bit as he chewed. He paused, swallowed and looked across the table at my mother. Very quietly he grunted and I vaguely heard him say something like "Mitsy....this is.....really good." After that we sat in silence until our plates were empty.

Ha! Take that Julie Powell!
Posted by Maryanne at 9:24 PM