My, my! It has been a long time since I've been here. That doesn't mean I haven't been cooking! I've actually been cooking up a storm (in between working, school and writing what is amounting to be the largest paper of my life). I just haven't had the time to actually sit and write about it. So here we go. Lets play catchup over the past few weeks.
It all started a few weekends ago. To help out a friend that had a beautiful baby girl, a group of us decided that we would all take a week to prepare meals for the family so they had one less thing to worry about. I got paired up with Alice "Lemon Tart" Mishkin and so, on a beautiful Saturday morning hauled myself and my knives (I never travel without them) to Park Slope to prepare a vegetarian 4 bean chili, cheddar jalapeno cornbread and a lemon tart (guess who really wanted that)! The chili was a recipe that I had come up with on the long subway ride from Washington Heights to Park Slope and was loaded with light and dark kidney, cannelini and black beans plus lots of veggies and seasoned with cumin, chili powder, oregano and garlic. For cornbread I always follow the recipe on the back of the Indian Head Yellow cornmeal but find that adding a finely chopped chili pepper and lots of cheddar cheese pumps it up even more. And finally, the lemon tart with a special note to remind Alice that it wasn't for her (I did however make her two mini tarts all for herself). I can't wait till little Ella gets big enough to enjoy my cooking! 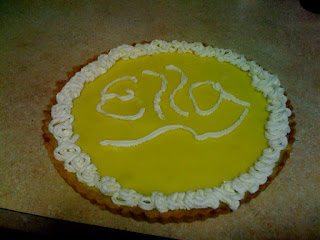 That weekend also brought a request for "Thomas" themed cupcakes. You know - that train show on PBS that used to have Ringo Starr, George Carlin and Alec Baldwin (!) as the narrator? So anyway, it's one of my best friend's son's 3rd birthday and he wants these Thomas cupcakes. Amy ordered the train cake toppers so all I had to produce were brightly colored cupcakes with colored squiggles to be topped. Easy right? Huh. My cake decorating skills are somewhat lacking so I admit I was a tad nervous but off I went. I baked up 36 cupcakes, half vanilla and half chocolate and then made a vanilla buttercream from one of my favorite basic recipes (out of the Amy Sedaris cookbook). I found these awesome gel food colors that don't dilute your frosting and allow you to get these amazing bright colors. Then using regular writing gel that comes in the little tubes in the baking aisle I made little squiggles on each and topped them with mini plane-train-automobile sprinkles I just happened to have in my cabinet (go figure). Amy's husband came to pick them up Sunday morning and topped them with the train toppers. So voila! Thomas the Tank Engine cupcakes! 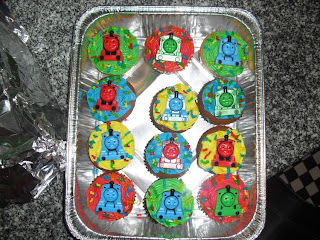 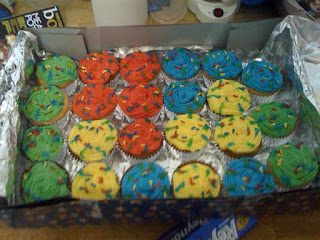 The following weekend brought a bonus snow day that resulted in many ham quiches from about 10 lbs. of leftover ham my parents had bestowed upon me. Really? I live alone and I work for a Jewish non-profit organization so bringing it into the office wasn't going to do much good. So I made quiche. A lot of quiche. I brought one to my friend Tracy, ate one and froze two. It was loaded with asparagus, cheddar and Gruyere cheese and, of course, ham. Having been inspired from my last snow day of bread baking I also tried Judith Jones recipe for french baguettes. The mini baguettes came lovely - unfortunately I didn't have a sheet pan big enough for the large baguette so I had to curve it to fit which made the curved parts a tiny bit tougher than I wanted. But for a first try I'd say I did fairly well. The trick to baguettes really is to get some steam going in your oven. Oh shoot! Did I ever take that pan out from the bottom of the oven? Huh.... (and guess who forgot to take pictures!)
The next day was Courtney's birthday so once again, I packed up my knives and headed back to Park Slope. On the menu this time was an appetizer of chili shrimp with a roasted tomatillo salsa, followed by a tequila marinated skirt steak (marinated with lots of red onion, garlic, cilantro, olive oil, salt, pepper, a splash of red wine vinegar and tequila), sauteed mix of veggies with multi-colored peppers, red onion, zucchini and eggplant, a citrus quinoa flavored with orange, lemon and lime and another jalapeno cheddar cornbread. For dessert I made a custard similar to the filling for a tiramisu and served it with macerated berries and topped with whipped cream. Judging by the minimal amount of leftovers I think I did fairly well! 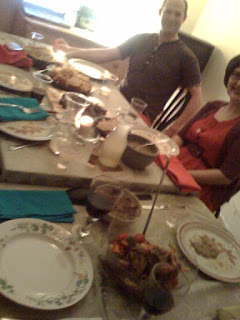 The final round of cooking was this past Wednesday evening. To celebrate the upcoming nuptials of another dear coworker and friend, we decided to throw a potluck lunch. To get things started on the right foot I said I'd make an eggplant parmigiana and a baked ziti. Everyone filled in with lots of yummy snacks and salads. There was mozzarella and tomato salad, olives of all shapes and sizes, a tomato bruschetta, an artichoke salad, lots of bread and cheese and a gorgeous (and huge) arugula salad with fennel, apples and a selection of cheeses (I couldn't decide if I liked it better with the gorgonzola or the pecorino romano). For dessert, I added a tiramisu to the mix and there were also italian cookies and pie (my favorite - blueberry)! (Because i'm so dedicated to my eggplant and this is already long enough I think I'll give the parm its own followup post so stay tuned).
Later that day was a birthday celebration for our Vice President for external affairs. With a split mind of wanting to make something special for a special woman but also having the idea of job security in mind (hey - my Mama didn't raise no fool), I also prepared a fruit tart. The morning of the celebrations I put together the tiramisu and also made preparations for the tart. I baked off a simple graham cracker crust (graham cracker crumbs, butter and sugar) in my tart pan and made a vanilla pastry cream for the filling. I learned the hard way that you really do need to watch that cream and let it come to a slow boil - because otherwise it can boil too fast and explode and you'll have to call your landlord to borrow a ladder and explain that you weren't trying to redecorate.... Anyway, of course, my tart pan is 11" and the cream wasn't enough to fill it so I snuck a little bit of the tiramisu in to fill around the edges. To cover up the two different fillings I covered the tart with rings of fresh berries. An inner circle of blackberries was surrounded by raspberries, then a few circles of blueberries and finally, an outer ring of strawberries. I had no idea what it would taste like or if it would even hold together when cut but it worked out to be delicious and gorgeous at the same time. The most frustrating part of this was that I didn't have the chance to take a picture of it! (So if you happened to have seen the tart could you please make a comment on it so people don't think I'm lying here????) Possibly one of the best looking desserts I have ever made.
And I think that brings us up to date on my cooking adventures for the past few weeks. Next up: Irish Soda Bread for Saint Patrick's Day and Zeppole San Giuseppe for Saint Joseph's Day! Who would have thought March to be such an exciting month for food!
Happy Cooking Kids!
Posted by Maryanne at 10:16 AM