Treat Days (and the secret to perfect Eggplant Parm)

At my office, every week there's a designated "treat" day. It used to be Monday's but for some reason, on this latest round, it has become "Treat Tuesday" perhaps for its more alliterative title. One person is assigned to provide a treat for the office and help alleviate some of the drudgeries of the day. The treats can vary and have included everything from cheese platters from Artisinal to a breakfast shmorsgasboard from Russ & Daughters to cupcakes, muffins, and these awesome little marshmallow-caramel-chocolate-pretzel things that I occasionally dream about. Part of the fun is waiting for the treat to be unveiled. So when my turn rolled around, I decided to go a little over the top and sent a warning that staff probably wouldn't need breakfast, or lunch, or a snack on that day. 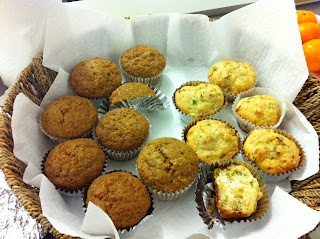 We started out with my version of a bread and muffin basket. I had a honey whole wheat loaf that I had in the freezer taking up space so that was the bread portion. Once defr 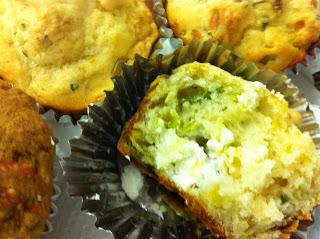 osted and toasted it was the perfect foil to be slathered with butter or cream cheese and really good strawberry preserves. For the muffins I decided to go for a combination of savory and sweet. The sweet were whole wheat carrot ginger muffins that were spiked with orange juice and zest. The savory were my favorite muffin recipe - a leek and chevre muffin that, when eaten while still warm just melts in your mouth.

A few hours later, I rang the lunch bell for eggplant parmigiana, baked rigatoni and a tossed green salad. The masses descended rapidly and before I knew it there were just three empty trays with just a few streaks of marinara left.
The eggplant is my Mom's recipe and both she and I have been told there is no better eggplant out there. The trick I think is to make sure that you slice the eggplant very thin and then salt it well. I also always peel my eggplant for this. Layer the slices in a colander, with a hefty handful of coarse kosher salt between the layers. Then, weight the whole thing down with a heavy plate on top and let it sit for a good 20 minutes on the counter (a little longer sometimes depending on what else I'm doing). I usually use two medium eggplants to make one 9 x 13 baking dish. When you're ready to begin frying the eggplant, remove the plate and you'll see a lot of brown liquid has drained out of it. That liquid is what can give the eggplant a brackish and bitter taste. The salt draws it out and you're left with a much more delicate flavor. Rinse it well of the salt and the remaining liquid that sometimes clings to the eggplant. Then pat it dry and dredge it in flour seasoned with a little black pepper and dip in a combination of beaten eggs, grated pecorino and chopped parsley. Fry the eggplant in batches in vegetable oil and drain on paper towels.
To make the parmigiana, spread marinara on the bottom of a baking dish (my marinara is a simple combination of olive oil, garlic, good crushed tomatoes, a slug of red wine and fresh basil). Then, put down a layer of eggplant, top with thinly sliced mozzarella, a good handful of grated pecorino and a few torn up basil leaves. Repeat until you're out of eggplant (easy to do if you're like me and snack on the fried eggplant while you're making your layers). Top with a final spread of the marinara, another handful of pecorino and a few more basil leaves. Cover with foil and bake at 350 until the cheese is melted and the whole thing is bubbling and you want to stick your face in it - 3rd degree burns be damned!
The baked rigatoni is about as simple as simple can get. I use rigatoni instead of ziti because I find it sets up better as ziti can become a tad mushy when baked. Cook one pound of rigatoni until it just begins to soften. You want it really al dente because it will finish cooking while baking in the oven. In a large bowl (or the macaroni pot you just cooked it in as I always do), mix it with some marinara, one pound of chopped mozzarella, one and a half cups of ricotta and spread in a baking dish (that you've already spread a bit of marinara in the bottom). Top with more sauce, grated cheese and fresh torn basil leaves. Cover and bake it at 350 till its hot and bubbling. I usually uncover mine for the last 10 minutes so the edges get nice and crispy. That always was my favorite part. 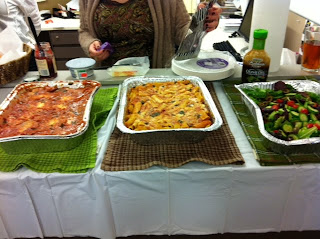 For dessert (because there had to be dessert) - I put a twist on one of my office traditions. Instead of doing a large tiramisu, I made small individual ones. I lined a muffin tin with cupcake liners and made layers using vanilla wafer cookies, my standard tiramisu cream, and then topped them with fresh whipped cream and a sprinkling of cocoa powder. They set up over night in the fridge and came out as little tiramisu cupcakes. Perfect for portion control (unless of course you eat six of them....).
Of course, at the end of all of this I think I sent the entire floor into a food coma and productivity took a nose dive for the rest of the day. But every once in a while, its worth it.
Happy Eating!
Posted by Maryanne at 7:45 AM