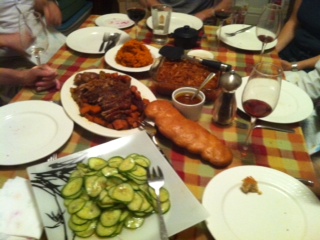 Growing up, I thought every Italian Catholic kid had a Jewish Aunt where they would go celebrate the holidays like Rosh Hashanah and Passover. It wasn't until I got much older that I realized how unbelievably lucky I was to have someone like my Aunt Judy in my life. Mom and Judy had been friends from at least High School (maybe longer?)so she has played a major role in my life instilling a deep love of entertaining friends and family in addition to inspiring my traveling bug. Couple this with the fact that I work for a Jewish nonprofit organization, and it really was only a matter of time before I found a way to use all of this to my culinary advantage.

Rosh Hashanah meals at Aunt Judy's are some of my favorite food memories. There was always chopped liver and matzoh ball soup. Dishes that passed the table included chicken with apricots, stuffed breast of veal, kasha varnishkes, tzimmes, kugel and more. Judy had small kitchen in Queens and it was amazing to watch dish after dish after dish come pouring out of that space. Of course, the more dishes that came out usually meant the more dishes I would have to wash later. At the end of each course Judy would gently bellow "Mitsy! Sweetums!" in a sing song voice, and before the next course was on the table I'd be well on my way to dishpan hands.

The other thing that amazed me about these dinners was the food storage methods that Judy came up with. I had no idea you could store so many things in baggies! Soup? Freeze it in a ziploc! Tzimmes? Squeeze it out like toothpaste! Gravy? Hah! No problem. Zip that right up.

So the other day, Stacie, my very best friend in the whole world was talking about how she hadn't had a Rosh Hashanah dinner in years. So having an almost embarrassing amount of time off this month for the Jewish holidays, and feeling pretty settled into my new apartment, I decided it was time for a formal dinner party and that my best bud would get her dinner. So I gathered a bunch of my closest friends to ring in the new year and indulge in a menu worthy of my Aunt Judy!

We started the meal with the traditional apple dipped in honey and Stacie read (phonetically) the brucha so that God might bless us with a sweet year. That was followed with gefilte fish and horseradish that Stacie brought and insisted a New Year's meal would not be complete without. Gefilte fish is one of those things that I can't quite wrap my head around. The smell upon opening the jar can be overwhelming but it's not unpleasant to eat. Almost everyone at the table tried at least a small piece and the general consensus was that it wasn't that bad with some opinions even bordering on "like". The next course was matzoh ball soup. I made the chicken soup that morning with a cut up chicken, carrots, celery, onion, garlic, peppercorns, thyme and parsley. When the soup was ready, I chilled it so that the fat would rise to the top and be easily skimmable leaving me with a clear light broth. I prepared the mix for the matzoh balls using matzoh meal (that I made from crushing up whole matzoh in the food processor). The matzoh meal was combined with beaten eggs, seltzer, schmaltz (that I pulled from the chicken I used to cook the soup), chopped parsley, salt and pepper. I let the mixture rest and then just before we sat, I took the fat off of the soup and let it gently heat while I simmered the matzoh balls in salted boiling water. To my joy and delight I had created floaters and not sinkers! Not bad for an Italian kid from Brooklyn! There were also loaves of homemade whole wheat challah. Unfortunately because of the humidity the bread just didn't rise correctly but the flavor was there. I'll just have to try again when the humidity breaks!

For the main course, I prepared a wine braised brisket. I had two beautiful point cuts of brisket that I seasoned liberally with salt and pepper and then seared in a screaming hot dutch oven. I surrounded the meat with carrots, red onions and celery and then covered the meat with a paste of olive oil, garlic and chopped rosemary. Covered in wine, beef stock and chopped tomatoes - I brought the liquid to a boil on the stove top, lowered to a simmer and then put the whole thing covered into a 325 degree oven to braise for about 3 1/2 hours basting the meat every half hour or so. 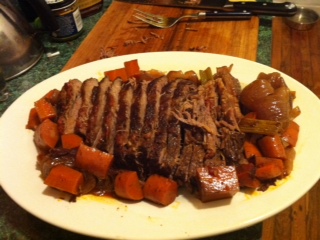 This was served with my version of tzimmes - a traditional sweet carrot side dish. I made mine by sauteing some onions in olive oil and added diced carrots and sweet potatoes along with some cinnamon and crushed cardamom pods. I let the veggies cook for a few minutes and then added about a cup of fresh orange juice mixed with some honey. I covered the pan and let it simmer on low for about 30 minutes. When the veggies were soft, I added the zest of one large orange, adjusted the seasonings and then pureed the mixture with a little extra broth. I wasn't initially going to puree but as I was mixing the zest, I noticed the vegetables starting to fall apart so figured I would just finish it. What resulted was smooth and creamy without the cream and just a perfect hint of spice. It's incredibly good for you and yet feels ridiculously indulgent while you're eating it.

We also had a sweet noodle kugel that I made by making a caramel, then boiling the caramel with water, salt and pepper and allowing egg noodles to absorb that liquid. Add 4 beaten eggs and pour into a casserole dish and top with more freshly ground black pepper. That went into the oven at 350 for about a half hour until the top was crispy and brown. The only thing that would have made that better would have been to toss in a few raisins or dried apple pieces. Well - now I know for next year! Feeling the need for something green, I also made a cucumber salad by slicing English Cucumbers on a mandolin (no finger slices!) and dressing it lightly with garlic powder, smoked Spanish paprika, salt, pepper and a splash of red wine vinegar.

After a rest and some much needed dish washing (where now that I think on it, I bellowed similarly sweetly for my own friends to come help with the dishes...) we moved onto dessert. Traditionally there would be an apple honey cake, but I decided to use a dark gingerbread pear cake that I love at this time of year. Moist and rich with fresh ginger and loaded with chunks of pear, the cake was a beautiful end to a great meal.

Everyone pitched in to wash and dry the dishes and, when it came down to storing the leftovers, it should surprise no one that the tzimmes and the soup both went into baggies! The brisket? Into a baggie along with the gravy! There was a method to Aunt Judy's madness after all.

What a great way to ring in 5772! Surrounded by my very best of friends, doing what I love, and keeping traditions going while adding my own twists to it. Doesn't get much better than this!