One random night last week, as we do most nights,  the fiancé and I were watching the Food Network. It was an old episode of Guy Fieri’s – I knew it was old because it was his original set with the pool table rather than in his fancy outdoor home kitchen. He was making an Indian dish – sort of a modified Butter Chicken. His recipe though intriguing, sounded too heavy for me with lots of butter and cream. I didn’t even watch the whole episode but somehow the initial sweating of onion, ginger and garlic in a sauté pan was enough to spark my interest and I wondered how to incorporate those flavors in something that I wouldn't wear on my hips for the next three weeks. Actually, come to think of it, I didn’t think of much else for quite a few days. My brain can get like that – I’ll get an idea about food and it just stays there until I finally do something with it.

For a few days, I played around with ingredients in my head trying to figure out exactly what I was looking for. Something warm, homey, but not overly heavy. The main items that were flopping around in all the open space of my noggin included chicken thighs, onions, ginger, garlic, and garam masala.

Garam Masala is an Indian spice blend that literally translate to hot mixture. Recipes for it vary from household to household but it generally includes cloves, cinnamon, nutmeg, mace, cumin, dried chile peppers or peppercorns, coriander, and whatever else you can think of to warm up your insides. It's one of my favorite spices but it can be overpowering so you need to find a blend you like and then figure out the right amount to not blow your palette.

Ok, back to the recipe. Eventually I threw coconut milk and tomato paste into the mix. After consulting with an Indian friend, she recommended kicking up the warm spice factor so my brain went with chili powder, cardamom and cloves. We needed a vegetable element so I originally thought of spinach and mushrooms but ended up leaving out the spinach (mainly because I forgot it at the grocery store…). So here's what we ended up with after a trip to the market. And yes, I'm listening to Serial while I cook - I'm a little behind the times but am completely addicted (and also completely convinced that Adnan did do it, and that he didn't, and that Jay did it and that Asia McClain is kinda of weirdo....). 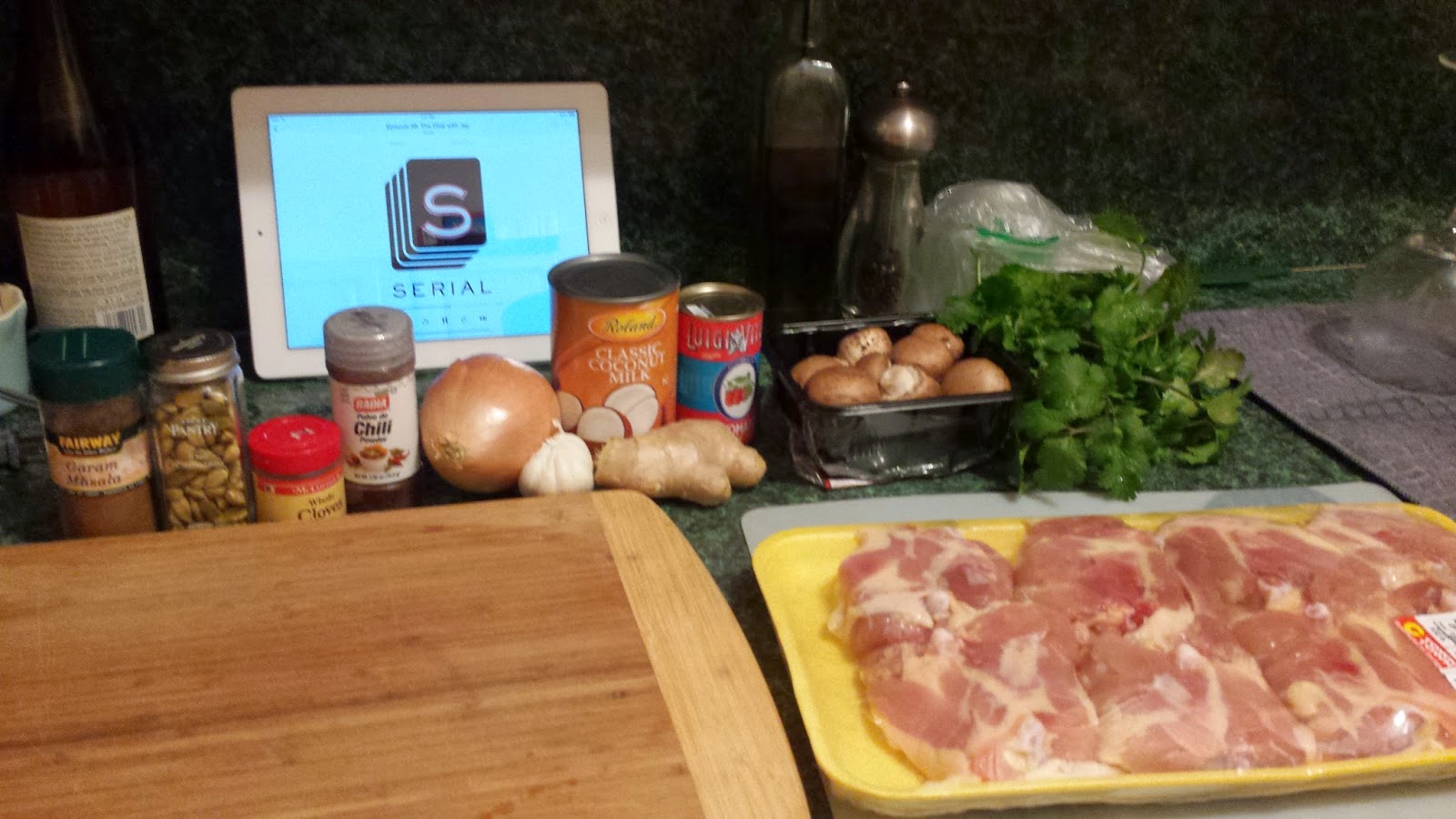 I sketched out a quick map of what I wanted to do, the order of the ingredients and for a change – took my time getting everything prepped and organized. Here's what my thought process looks like when I'm working out a new recipe. You can see that there's a lot of changing of ingredients - this one wasn't nearly as crazy as some other recipe development I've had. 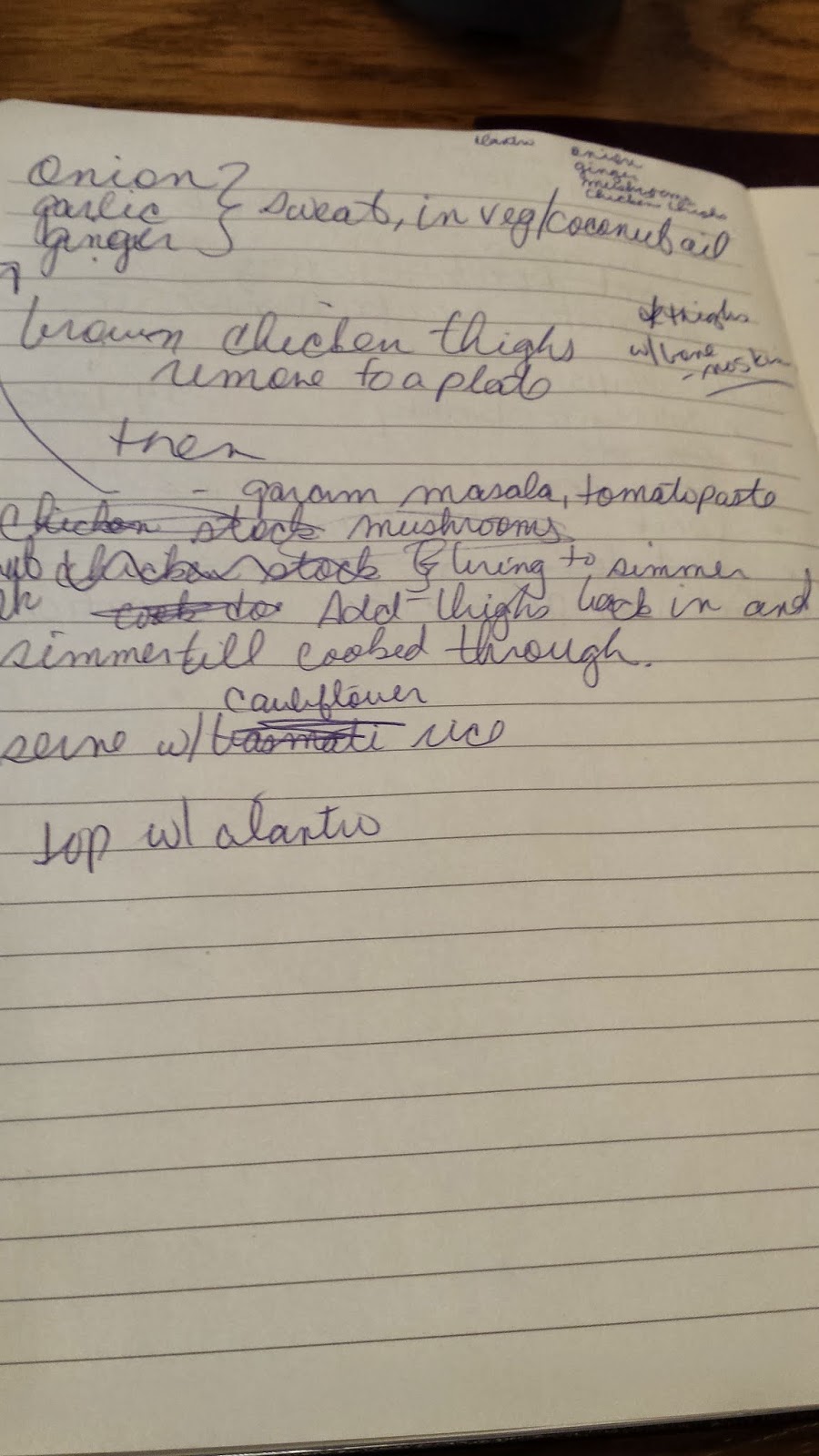 I started by removing the excess fat and skin from the chicken thighs. Don’t get me wrong – I like a nice crispy chicken skin, but in a braise it can make it super greasy so to avoid that I removed it. Bone in thighs are important here because the bone gives you a lot more flavor! You can substitute breasts if you want but you have to really be careful with the cooking time as they can dry out (yes, even when braised in all that liquid).  I placed the thighs in a pot with a lot of salt and cold water and let them soak. This is an old trick from my mother, my grandmother, my great grandmother and probably a bunch of great grandmothers before that. The salt does double duty – it seasons the chicken but it also helps to kill off bacteria (or at least that's what my maternal heritage has passed down for generations and none of them have ever had salmonella so we're going with that...). After about 10 minutes of soaking, I let cold water into the pot for another 10 minutes, flushing out the salted water and rinsing the chicken. By the time this is done, the chicken bones and fat and skin have lost that yellow tinge and look brighter and whiter. Pat the chicken dry, season it with salt and pepper and brown in a large pan with some melted coconut oil. 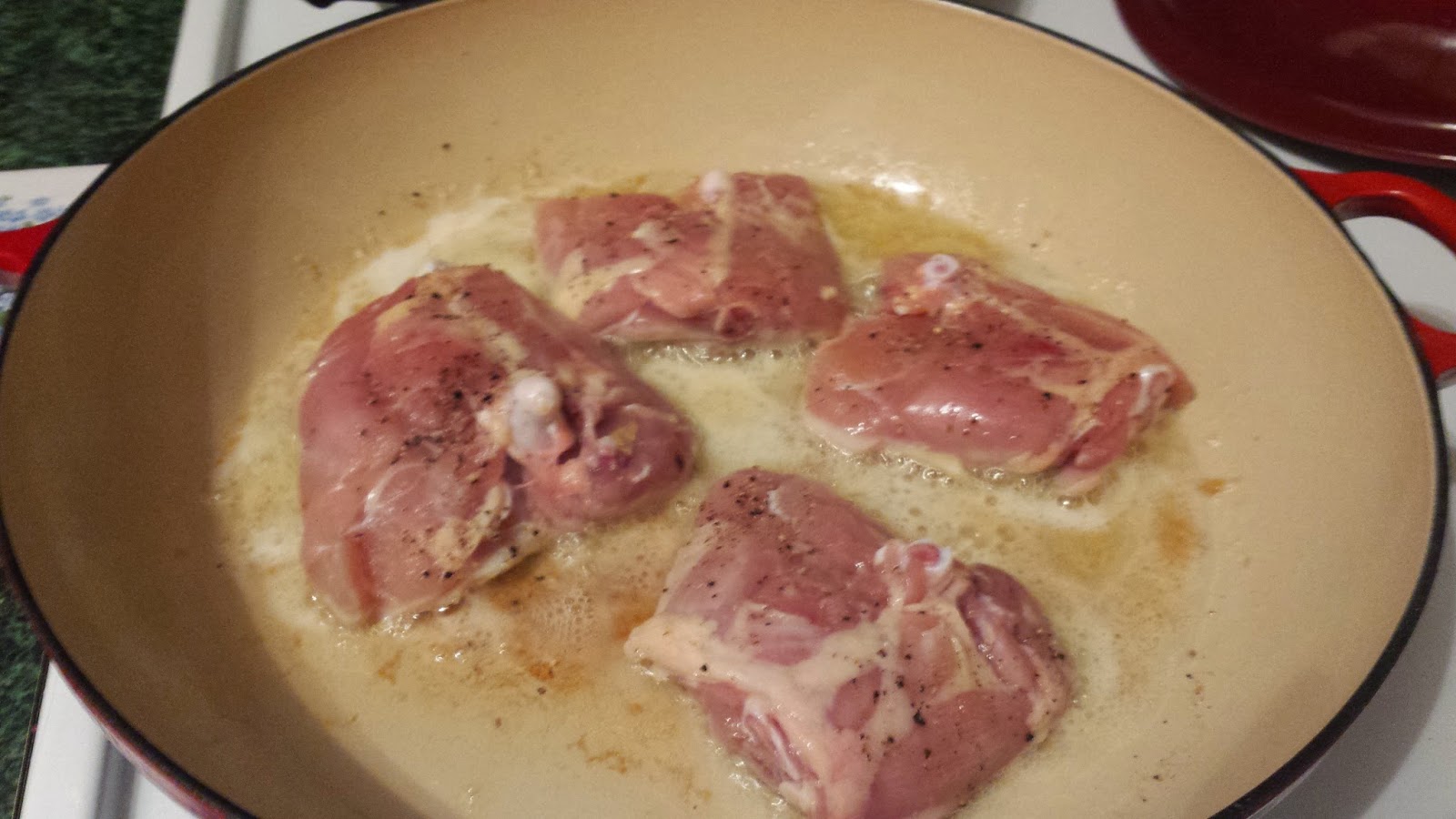 Let’s talk about coconut oil for a second. I have a lot of friends that swear by the stuff. I like it – for certain things. But to me it does give off a strong coconut flavor so I don’t use it in everything I cook (meatballs sauteed in coconut oil doesn't work for me). However, for this dish, it worked beautifully. For when I want to use high heat without the extra flavor I’ll use either lard (home rendered preferred), avocado oil or clarified butter (you can make or buy this). Olive oil is great for sautéing but it’s not the best for super high heat cooking and can turn bitter if it gets too dark. Stick with these other methods for a hard sear on meats and you’ll get great flavor every time.

OK, back to the task at hand. While the chicken was brown, I diced up a large yellow onion, a good size chunk of ginger and six garlic gloves. When the chicken was browned, I removed it to a plate, lowered the heat and added the onions and ginger. You don’t want to really brown the onions, just sweat them a bit so keep your heat fairly low. When the onion became translucent, I added the garlic and let it cook for a few minutes.

Once the apartment began to smell like what I had been dreaming of, I added one tablespoon of chili powder, two tablespoons of garam masala (mine is from Fairway, you can buy or make it if that’s your thing), 4 cracked cardamom pods (just crack them with your knife like you were crushing a garlic clove) and 3 cloves. I mixed the spices in with the aromatics and let them toast a bit, then added in two tablespoons of tomato paste and let it caramelize for about two more minutes.  Mix this all together and imagine your neighbors drooling with jealousy as they walk passed your door. 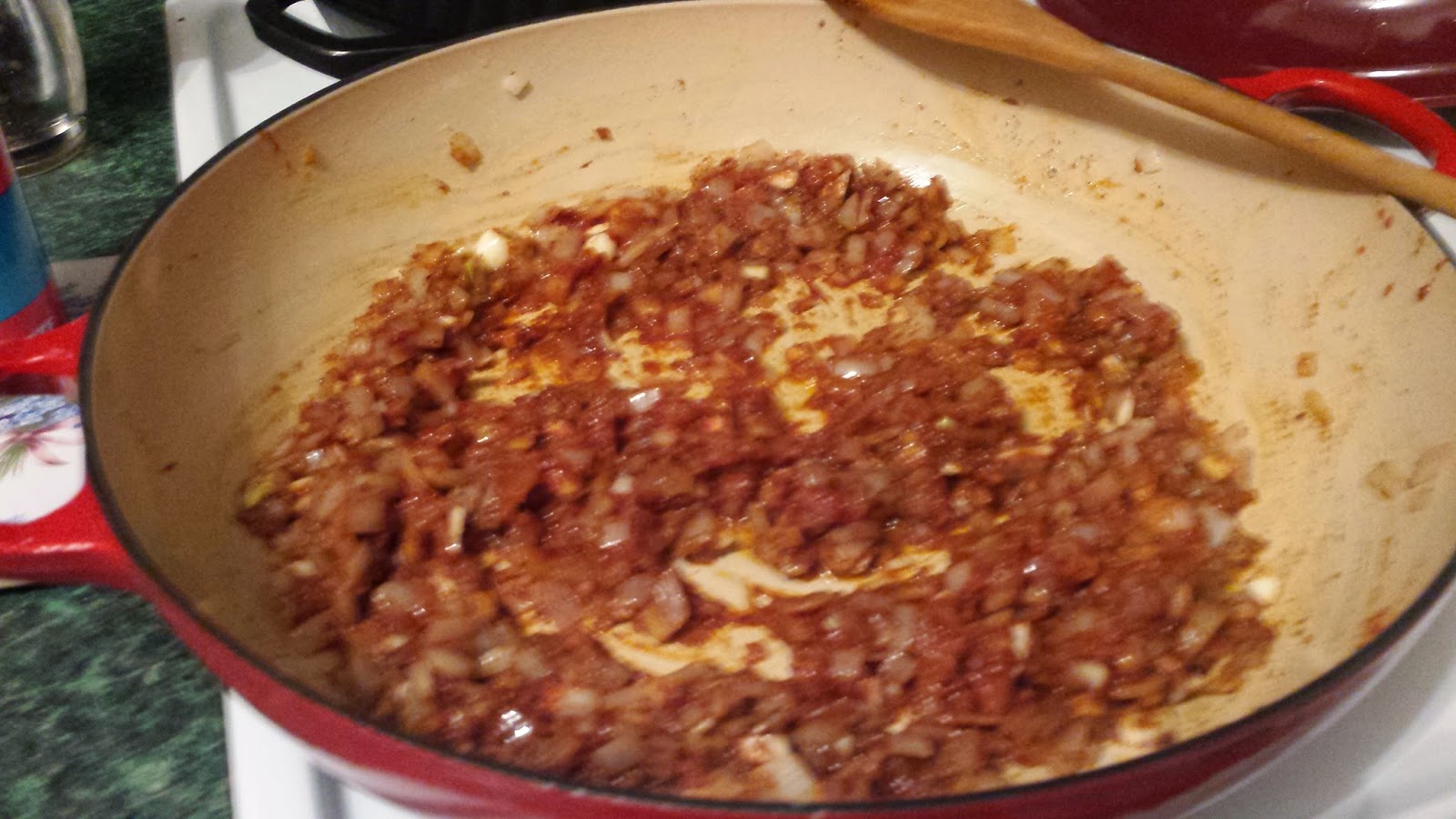 To this mixture, I added one can of coconut milk, half a can of water, stirred it all up and brought it to a simmer.  The thighs went back in along with any juices collected and the whole mixture got stirred up. I also added 8 oz of mushrooms that I had cleaned and quartered. Then, I let the mixture simmer on low for about two hours. Actual time will depend on the size of your thighs. They are ready when they are tender enough to cut with a fork but you don’t want it to shred apart when touched (or maybe you do if that’s your thing. Just don’t overcook them!) 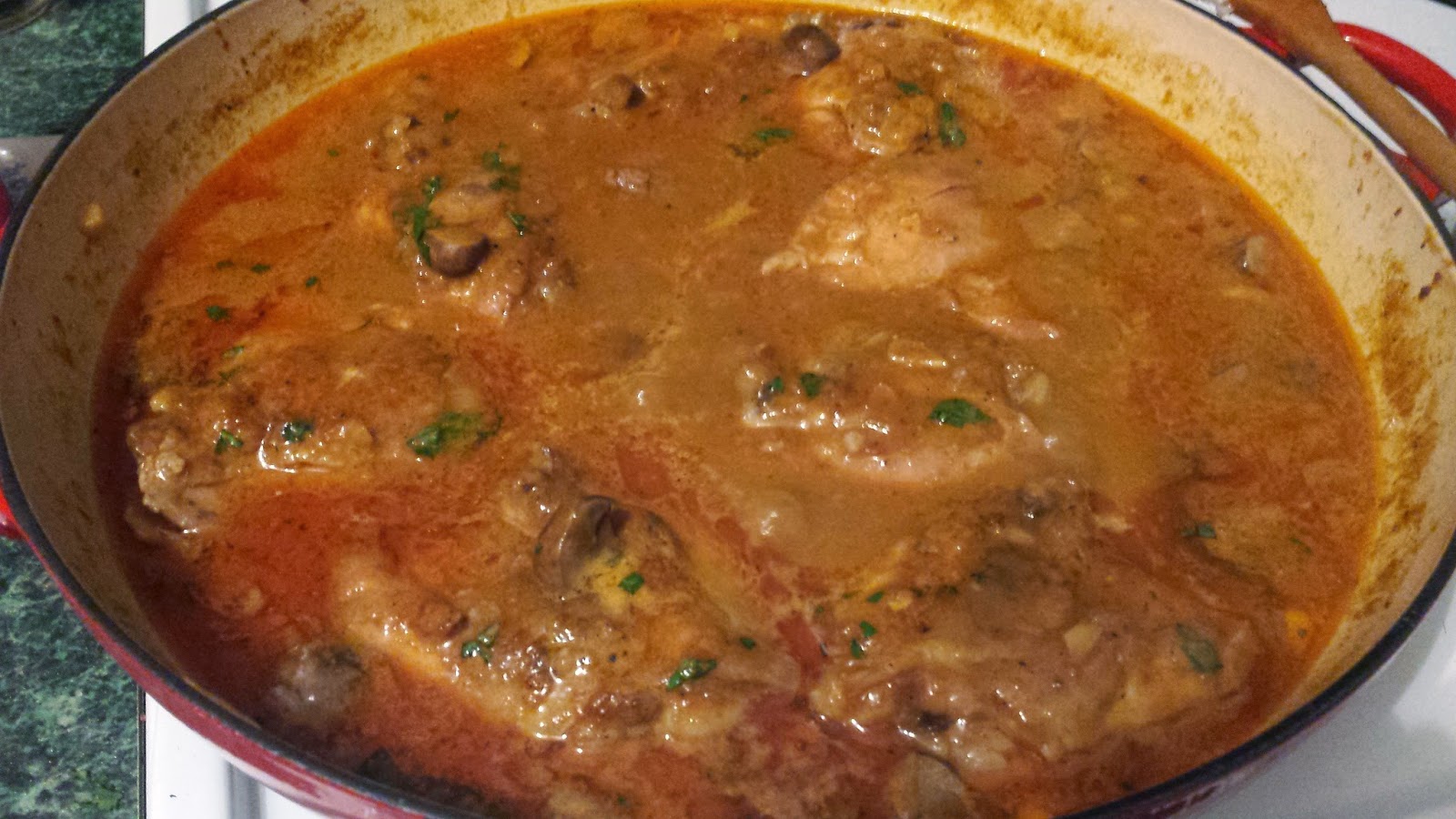 You can serve this over cauliflower rice (a full blog on the wonders of cauliflower will be coming soon but in the meantime you can find recipes for it here, here or here), steamed basmati, long grain white rice or bake up some hot Indian naan to soak up all that sauce. I really like this one if you’re ambitious enough to make it at home.

Though this was a pretty far departure from my normal Italian comfort food, it was exactly what I was looking for! It was light enough to not feel heavy on my belly but also flavorful enough to keep me warm and satisfied on a cold winter night.  This will definitely be entering the rounds of weeknight dinners!  It also inspired me, and I hope it inspires you too to get out there and experiment. If something sounds good - give it a shot. All cooking is good cooking if it comes from the heart! 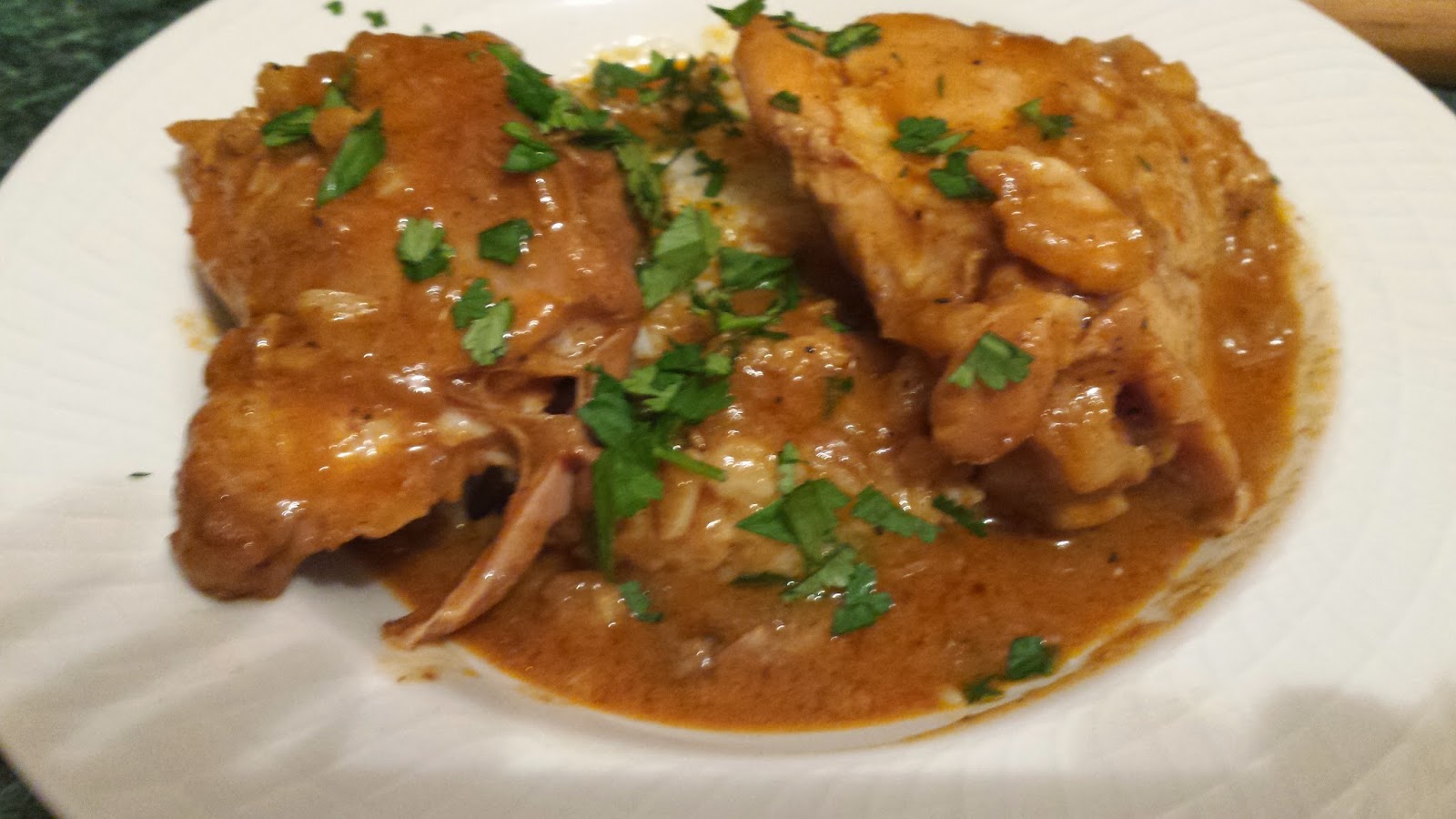 PS I know I've been gone for a while. Life sort of got in the way there for a while but I'm back and cooking more than ever and am so excited to share it all again (with all six of you that read this...Hi Mom! And Stacie! And Auntie Judy! and those three people from Ukraine that seem to log on all the time....)
Posted by Maryanne at 3:00 PM