Yesterday I woke up with the urge to throw a dinner party and thankfully I have friends who are willing to indulge me these impromptu whims.  Earlier in the week I had been having a fun debate with a friend about a New York Times article that mentioned making your own Hostess style treats (find the article here). He insisted I keep up with my newly implemented workout routine and skip the cupcakes.  I countered by asking if I said I was making something more of what he liked (namely, a good steak or a beautiful piece of white fish) would he change his response.  The answer, was, of course. And so - a dinner party was born.

I gathered just a few friends as I had a feeling this was going to be an expensive style menu (although at the time I wasn't sure just how expensive!)  and sketched out a menu.  I wanted to do a seared scallop for a first course, a surf and turf option for a main and homemade ice cream for dessert.  So after spending the morning rearranging my living room and fixing up the dining room a bit (which doubles as a second bedroom when I have out of town guests...) I grabbed my green bags, my credit card and hopped on the subway to head down to Chelsea Market where I knew the seafood selection would be the absolute best.

Upon entering Chelsea Market, I made the plan to head to the back and start with produce and then work my way forward.  The produce market there is one of my favorites. It has a huge selection and is generally very reasonably priced.  At this point I decided that the main was going to be two simply prepared proteins that could both be topped with a chimichurri sauce so straight to the fresh herbs I went.  Cilantro, parsley, oregano and a head of garlic into the basket. Followed by mustard and turnip greens for a side dish, and then I spotted sunchokes and decided a puree of sunchoke would be the perfect base for the seared scallop.

Next stop was the Italian market just because no stop to Chelsea Market is complete without it. I kept myself reigned in and just purchased a small block of robiola, olives and some whole wheat tarali (small donut shaped savory crackers).  Next stop - the Lobster Place for the fish.  First over to the scallops where I purchased four perfect jumbo scallops.  The man behind the counter must have hated me because I wanted to look at each scallop to ensure it's perfection.  And then over to the halibut.  At $27 per pound I wanted the perfect piece that I could cut into four equal portions. The first two didn't measure up - the third was the one. And then I made my fatal flaw - I decided to look into Dickson's Farm Stand Meats for the turf option.  Right in front of me are these gorgeous bone in ribeyes.  Thick, beautifully marbled and bright bright red I couldn't resist. At $29 per pound I probably should have resisted.  But I didn't.

So home I came to start dinner.  Immediately I made a quick custard for my ice cream.  I had originally planned on doing a chili spiked chocolate but I realized I had run out of cocoa after some recent Momofuku Milk Bar Cook Book experiments so I switched to vanilla. 5 egg yolks, 2/3 of a cup of sugar whipped and combined with scaled half and half and the scrapings of a vanilla bean.  Then cook till thick and into the fridge to cool

Next - sunchoke puree. Peel the sunchokes and boil in salted water till soft. Meanwhile I tossed a few garlic cloves (unpeeled) into the toaster oven at 400 and let them roast up. When the sunchokes were soft I combined them, the soft gooey roasted garlic, a couple of tablespoons of butter, a splash of cream, salt and pepper and blended with my stick blender (all fingers intact for those who knew me when....).  The result? A gorgeous smooth earthy puree.

Next step - assemble the chimmichurri.  Oregano (3 sprigs), parsley  (1 packed cup) and cilantro leaves (about 1/4 packed cup), cleaned and picked over and dumped into a food processor with olive oil, a few cloves of garlic, salt, red pepper flakes and some acid - in this case I used a combination of meyer lemon juice and red wine vinegar.  Pulse until smooth and pourable and then into the fridge to let the flavors marry.

I wanted to do a coconut rice with the main course so I combined one can of coconut milk (full fat) and one can of water with two cups of jasmine rice and cooked in the usual method of bringing it to a boil and then reducing to a simmer. Just before the rice is done I turn off the gas, place a kitchen towel over the top, cover again and let it steam for about 10 minutes. I don't know where I read this - but it is a technique that yields perfect fluffy rice almost every time.

At this point the doorbell started ringing and of course I was nowhere near ready but thankfully my friends know me well and there was the cheese and olives to nibble on. While they chatted and snacked I set to searing the scallops. First I made sure they were completely dry so they would be able to get a perfect sear. A little salt and pepper and then into a screaming hot pan for just over a minute on each side.  Each scallop was set on a pool of the sunchoke puree and topped with a small pea shoot salad dressed simply in meyer lemon juice, olive oil and salt. The result? YUM!

ribeye and each person had a serving a fish, a portion of steak, topped with the chimuchurri, along with some rice and greens.

After dinner, we retired from my rickety table into the living room while I churned the ice cream.  And churned....and churned. It got cold and semi-soft but never quite seemed to get all the way to ice cream.  It might have been because I only chilled my ice cream bowl for 8 hours instead of the recommended 12, or maybe I should have cooked the custard a bit more. Either way we had delicious bowls of chilled vanilla soup. But since nearly all of us as children enjoyed stirring our ice cream into a soup-like consistency this was a-ok with us.

In near food comas my friends trudged out with those half feeble offers at dish doing and feeling bad for leaving such a mess. When I looked in the kitchen and realized I had used nearly every saute pan and prep bowl I owned which was now piled high in my sink I thought for a moment about sending them in there to clean. But one look at their sleepy eyes told me it was a lost battle.  When it was just me and the cats, I packaged up the leftovers for the fridge, soaked a few things, tossed a few others and then turned out the lights.  The dishes aren't going anywhere - and frankly neither is my urge to continue to throw dinner parties.

Now if you'll excuse me I have to go tackle that mess in the kitchen and get it all sparkly clean....so I can make a new mess of course! 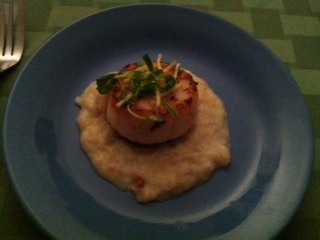 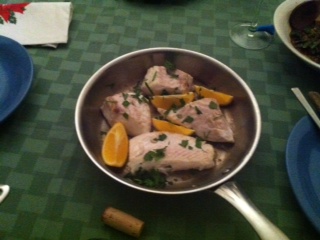 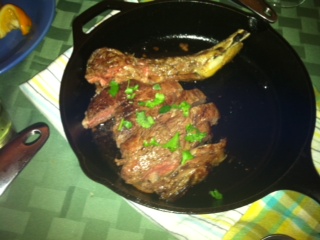 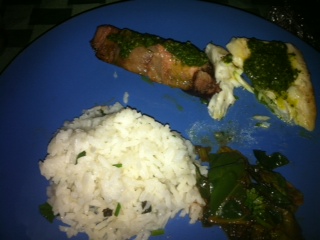 Oh - sorry about that last picture. At that point I was more concerned about getting the food into my belly rather than making it picture worthy :-)
Posted by Maryanne at 11:18 AM