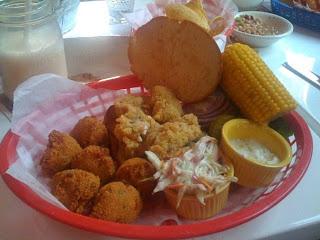 Last night I met up with a few friends for dinner at Cowgirl Sea Horse, the new South Street Seaport outpost of the famed West Village destination Cowgirl Hall of Fame. I had read a number of very mixed reviews on Yelp and Menu Pages and other assorted web sites so was eager to form my own opinion.
I arrived a few minutes late (which for those of you who know me is practically on time) and found myself wandering down Front Street amongst a sea of new restaurants. Nowhere did I see a Cowgirl or the giant sea horse hanging out front. A quick phone call and I was directed to cross Peck Slip and go all the way down Front stopping just before I slammed into the Brooklyn Bridge. There it was on the corner, looking very cute and very kitsch. The place was about half full with a smattering of patrons at the bar and a few tables occupied. I joined my friends at their table already halfway into their frozen cocktails and picked up where the gossip had left off at our last night out (nearly two years ago!).
Not in the mood for a margarita I tried something very unlike me off the cocktail menu - The Cowgirl Coolada. A mixture of pineapple and coconut juices and 3 kinds of rum blended with ice to a creamy froth and served in a mason jar with the requisite non-eco friendly plastic toys. The drink is definitely sweet but went down fairly easy. I definitely could not have more than one of those in a night but it was a fun start to the meal and the sweetness was nicely offset by the chips and Texas caviar on the table. One of my dining companions tried the margarita - both on the rocks and frozen and determined the frozen margarita won the day although commented that both tasted like they were from a pre-made mix.
Onto the food. The Oyster Po'boy basket looked beautiful albeit a bit beige when it arrived. It was loaded with huge sweet plump oysters. Slightly over-battered but still surprisingly crispy with no heavy oil taste. The roll they were served on left me a little disappointed - it wasn't the crispy french bread that I usually associate with a po'boy but was instead a plain hamburger roll. Oh well. Less carbs to ingest. It came with a side of cole slaw which was tasty albeit a bit soggy, a sort of odd piece of lettuce, an unripe tomato slice and some pickle chips. The corn-on-the-cob was just ok. It was sweet and buttery but the somehow felt overcooked with the kernels slightly shriveled and dry not plump and juicy. And then there were the hush puppies. I love hush puppies. I'm fond of picking one up, staring at it closely and yelling "HUSH! [Pause] PUPPY! " before popping it into my mouth. (I don't know why. I just do. You all have strange habits too.) But sadly these just didn't inspire me in the same way. They were solid massive blocks of cornmeal flecked with something that might have been bell pepper. I found them too dense to enjoy particularly after the heavy breading on the oysters. Other menu options also left us feeling cold. The clam fritters had very little clam and were very heavy on the bread and seasoning. I'm all for flavor but that much seasoning on my shellfish leaves me wondering exactly what they're trying to cover up. The veggie burger had a texture that made it similar to baby food and the too smooth guacamole served on the side only added to that. Most of it was left behind.
A highlight of the menu were the onion rings which were buttermilk battered and fried to a beautiful golden crisp. We saw a plate of nachos go by to the table next to us which also looked (and sounded) quite good. And one of my dining companions highly recommends the fish tacos that she has enjoyed at many a few lunches since she works in the area.
Service was quick and friendly. I think our food order took less time to arrive than our drinks but that's understandable when there's a blender involved.
Ultimately I think this place still has potential. It's cute. It's in a great location off the beaten path just enough to steer clear of the tourists but relatively easy to get too as long as you don't wear stilettos on the cobblestones. Dinner and drinks with tip came to about $30 per person which really isn't bad. I'd recommend it for drinks and maybe appetizers before or after a walk in the Seaport. I'd just skip the entrees until they work out a few more of the kinks.