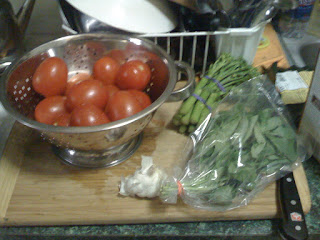 My Dear Friends and Family,

It is with utmost shame that I admit to you that this evening, I came very close to giving into a horrible temptation. I have no idea what came over me. Perhaps it was the heat, or the result of a somewhat stressful day in the office, or perhaps it was the last effects of that stupid rum and diet coke I thought was a good idea after a half bottle of wine late last night? More likely it was an evil combination of all three, clouding my judgement and making me momentarily forget myself.

What was it that was so terrible you ask? Tonight, I, Maryanne Lorraine Theresa Nigro, held a jar of a factory produced tomato sauce in my hands AND considered purchasing it. Jarred sauce!!! Me! In my kitchen! Those of you who know me know how absolutely shocking this is. For a split second even I thought it was possible. I argued with myself, out loud, in the middle of Frank's Market up here in Washington Heights. "People do it all the time. No one has to know. It's too hot to really cook. Mom will kill me if she finds out..." All of this and more was rushing through my head. I was giddy with defiance and was close to putting it in my shopping basket. Suddenly, out of nowhere I heard my grandfather's voice, so close as if he were right behind me say "Kid what the hell are you doing with that???" That was when the price tag of $8.99 caught my eye. Seriously? $8.99???? Thanks Grandpa! After a quick scan of the ingredient list I was mystified as to what could have possibly cost $9. Tomatoes, garlic, onion (yuck - anyone who knows me knows I don't believe onion has a place in marinara sauce), oregano, basil and salt.

After replacing the jar on the shelf and resolving to flog myself later for the mishap, the reality of the season hit me. Here we are at peak tomato season and I was about to commit a mortal food sin! I quickly remembered myself and set about gathering ingredients for my own sauce that would kick that jarred product's oniony behind any day! 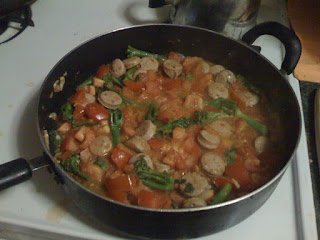 Fresh, ripe plum tomatoes, garlic, sweet basil, chicken sausage (for a lean protein boost) and broccolini because Produce Pete said it was in season (ahh Pete. I have long harbored a secret..and well..now not so secret crush on him and his eggplants, tomatoes, squashes, and whatever else he recommends that week).

I set to work as soon as I got in slicing 4 cloves of garlic, chopping tomatoes, cleaning the broccolini and slicing up the sausages. In a hot pan I sautéd the garlic with a good pinch of hot red pepper flakes. Just as it turned golden I added the broccolini and cooked that until crisp tender then added the sausage to brown up a bit. I deglazed the pan with a portugese white wine that was open in the fridge (and helped myself to a glass as well - of course) and finally added the rough chopped tomato and some torn basil. While this perked away ever so lightly I cooked up some whole wheat penne in salted water. In a method I picked up from watching many episodes of Lidia's Italy, I let the pasta finish cooking in the sauce and finished it all off with a (large) handful of grated Pecorino Romano and some more fresh basil. 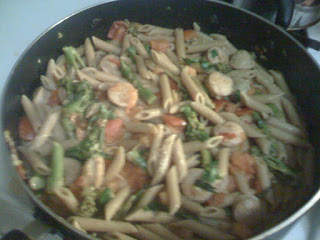 One bite assured me that there was no way anything in a jar could come close to this. Don't tell my Mom - but she was right. Jarred sauce is something 'other' people do. Next time you're ready to pick up that jar I hope you'll consider making your own instead. You'd be surprised how easy it is. 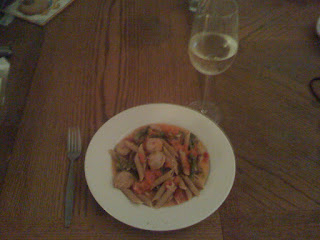