You put WHAT in your stuffing??? 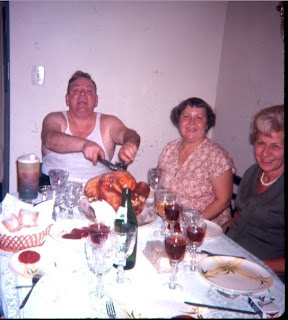 Thanksgiving! It's always been one of my favorite holidays and this year is no exception. The biggest change this year is that for the first time in my 32 years of life we did not have Thanksgiving dinner at my parent's house. Instead, we gathered at the new home of my brother and sister in law. And boy, do I mean gathered. 16 Carraturo's and Nigro's gathered around an extended dining room table for one of the largest feasts I have ever seen. Everyone was responsible for something different. My sister in law's family would handle the turkey, a ham and some of the sides, my Aunt Terri would bring wine and the best Italian bread found this side of the Atlantic from Cuccio's Bakery on Avenue X in Brooklyn and I was on dessert (which incidentally was a white chocolate pumpkin cheesecake with a gingersnap crust, a maple bourbon sweet potato pie and a chocolate cream pie in case you were wondering). My mother was going to make her stuffed mushrooms but more importantly she was to make her famous stuffing.

Now, what's so special about stuffing you ask? Well - this is no ordinary stuffing. When I was a kid I'd see commericals for stove top and cringe. Bread in stuffing? Blech! My neighbors across the street made a stuffing with rice and chestnuts and sausage which puzzled me through the years. This was something Americans ate with their turkey. But we, we were Italian. Bread had its time and place at every table but NOT in stuffing. I remember every Thanksgiving morning my grandfather would come over sometime around 5am. He'd prepare the stuffing that morning and then stuff the bird, sew it up and get it in the oven before heading home to relax a bit and clean up before he and my grandmother came back for dinner that afternoon (served traditional Italian American style at 2pm and lasting until somewhere around 9pm).

So now you're probably asking what goes into this famous stuffing since there's no bread and no rice. It is the perfect blend of eggs, mozzarella, sausage meat and a few raisins. You start by browning bulk Italian sausage in a hot pan, if it doesn't already have fennel you should add some fennel seed to the meat for flavor. When its brown you add beaten eggs and let them begin to solidify. Then add cubed mozzarella and the raisins and stir till it just starts to set. We put some of the stuffing in the bird and let it roast until its all fully cooked and the rest goes into a baking dish and gets baked along side. I know I know - it sounds unnaturally simple but it really is the perfect combination of savory flavors.

This stuffing has been known to resolve family conflicts, or, start them if the distribution of leftovers is not done evenly. My brother and I have been known to resort to low tricks such as hiding the remaining stuffing in the back of the fridge under the brussel sprouts where we think the other won't look. I had an ex-boyfriend once who years after we broke up still came around for leftover thanksgiving stuffing (in exchange he gave us jars of his homemade Irish cream). We've argued the proper egg to sausage ratio, whether it should be 6 raisins, 8 or 9....whether an even or an odd number is better luck. But we've never thought about changing the stuffing.

I was 30 years old before I tried and accepted the fact that stove top and other bread stuffings had merit. Wild rice with sausage and roasted chestnuts is absolutely delicious and makes for a wonderful side dish. But don't you dare come anywhere near my bird with anything but the stuffing of my youth. Anything else is just bread!

Happy Thanksgiving everyone!
Posted by Maryanne at 4:58 PM