My theory of food is make it taste good first, make it look good second. I know they say we eat with our eyes first - but no matter how beautiful a plate looks, if it doesn't have the flavor to match then it's just a huge disappointment. This week however, I had the opposite experience. I was asked to do some baking for a baby shower that we were throwing for a coworker. I was originally just going to make my version of tiramisu but then someone noticed a Christmas gift that I had been carrying around with me that day called "Hello Cupcake" and the next thing I knew I was going home that night to make babies!
I should throw the caveat out there that I am NOT a cake decorator. My icing skills are far from perfect and I think I only recently discovered how to twist a piping bag shut so it doesn't leak out the back. So why I agreed to do this was beyond me. Even though the book said it would be simple - I was still nervous. No fondant, no sugar paste - just regular icing (from a can even), some marshmallows and fruit chew candies. Still - I had images in my head of creating something that would come out more like monsters rather than babies.
I started out by baking box-mix cupcakes. These were going to be more about appearance rather than taste - and really - who doesn't like a good Duncan Heinz every now and then? When the cupcakes were baked and cooled (standard for the base and mini for the head) I frosted them as smooth as I could with a vanilla frosting tinted light pink (I did have to ditch one batch that came out too neon - as I said...alien monsters). Using a Ziploc baggie filled with chocolate frosting I piped eyelids onto the minis and belly buttons onto the standards. The book said to pipe eyelashes but that just wasn't happening. I cut up mini marshmallows and stuck them to the heads as bonnets and even tried making safety pins out of white chocolate (there were a few successes here but most of them just broke when I tried to peel them from the waxed paper). Each standard cupcake had a pretty border piped around it - I did some white as the book called but also did a few with chocolate figuring we could tell the mommy-to-be they needed to be changed (Yes, I know...ew).
The hard part came when I had to attach the heads to the bodies. According to the book you just set the mini cupcake on its side on the standard cupcake and poof! You have a baby. Only I kept ending up with headless babies - kind of scary dark for a baby shower! So I did what any good mother would do and stuck a sharp object through the baby head (in this case - a toothpick) to make it stick to the body! Worked like a charm. A few finishing touches of fruit loop mouths, baby bottles and teddy bears (teddy grahams) and voila! A basket full of babies to help welcome our newest coworker into the world!
When I was all done I sent a photo of the little darlings to my mother with the subject line "Look! I made you grandbabies!" Probably not what she was expecting but I think they turned out pretty cute. :) I have to say that for my first foray into decorating this wasn't a bad experience. Five hours later I had 15 little cupcake babies, a kitchen that was covered in pink frosting and I had probably eaten my weight in mini marshmallows and starburst - but it was worth it. The hard part came on the day of the shower when everyone began to eat them....head first as was my fear! My poor little babies...I had gotten quite attached to them - but its OK. I can just go make more :-). 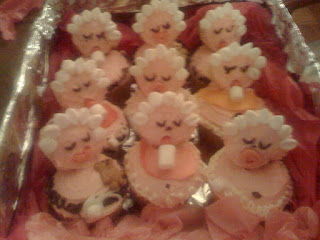