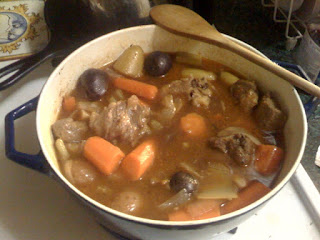 Is it possible to crave something you've never had? Can the brain combine flavors and textures that it knows into something brand new and tell your stomach that this is what it wants? I'd have to say yes. Yesterday I woke up thinking about lamb stew. I have never made nor eaten lamb stew but I've had plenty of lamb and plenty of stews. I couldn't get the thought out of my head. Whether I was having coffee and donuts with friends, wandering the aisles of the new Costco in Harlem or chowing down on a Big Mac while parked in a bus stop in my friends SUV the thought of lamb stayed with me. I flipped through a few cookbooks and searched the standard cooking websites but I couldn't find anything that appealed to me. The Irish lamb stew recipes seemed too bland and the Moroccan style, while delicious seemed more complex than my comfort food seeking brain was looking for.

So I made it up. I knew in my head what I wanted to create. A rich stew with chunks of lamb, loaded with vegetables in a rich broth. For some reason I wanted it to have a Guinness base. On my way home I stopped at my favorite overpriced market in the neighborhood and picked up lamb stew meat, multi-colored fingerling potatoes and a large white onion. Using a tried and true method for beef stew I seasoned the lamb with salt and pepper and gave it a light dredge in flour. I browned the lamb on all sides in vegetable oil. When the lamb was browned I wiped out the pot, added a little olive oil and gave a quick saute of my veggies (carrots, potatoes, onion, celery and a smashed garlic clove). The lamb went back into the pot along with a little tomato puree, beef broth and of course, a half bottle of Guinness stout. I added a few sprigs of fresh thyme, brought the whole thing up to a boil and then lowered the gas and let it simmer for 45 minutes. After 45 minutes had passed I took the cover off and let the liquid boil down into a dense rich broth.

A dip of my tasting spoon told me this flavor combination that was so new to me was in fact what I had been craving. The lamb was tender, the vegetables soft and the broth was rich and complex with the Guinness providing an earthiness to the dish that I was looking for.

My Mom has always been an amazing cook but what amazed me the most was when she would put something together that she had never had before but that she just thought sounded "so good". She be in the kitchen adding a little of this and some of that and next thing we knew we had a new family favorite (that most likely would never be created in its exact likeness again). It was this spirit of adventure that gives me the courage to put lamb to stew and experiment on my own! Thanks, Mom :-)
Posted by Maryanne at 9:25 PM