No Kitty! That is MY Pot Pie! 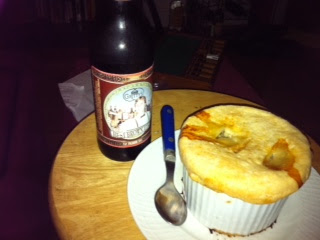 Thank you South Park. I really don't think anyone of my generation will be able to hear the words pot pie and not think of the scene with Cartman yelling "No Kitty! That's my Pot Pie!"

Now seriously - let's think about this. Chunks of chicken, carrots, pearl onions and peas in a creamy sauce and topped with flaky pastry. Does it get any better? Does anything satisfy you more on a cool fall night? And hot damn if they don't smell god while baking in the oven.

My first foray into pot pies came as a child when Mom would mix up the last of our Thanksgiving leftovers - turkey, stuffing, sweet potatoes, roasted white potatoes with peas and onions and carrots all together with a can or two of cream of mushroom soup and toss the whole thing into pie shells.  Something about the combination of those flavors pulled out of the freezer and baked up into a warm rich pie makes my heart go pitter pat.

Yesterday happened to be a perfect fall day. The sky was a gorgeous crystal blue, the air was cool but the sun was warm.  I got out of work a bit early and went for a run along the Hudson River side of Inwood Hill Park.  Feeling great (and figuring I deserved the indulgence after the run) I decided I'd go for it and prepare a pot pie.  I picked up a chicken, some bacon, carrots, potatoes, peas and pearl onions along with some cream and butter and headed home.

First things first - I soaked the chicken in a big pot of salted water and then cut it up into 8 pieces. Salt, pepper and olive oil and into the oven at 400 to roast for about 40 minutes.  Meanwhile I made a basic pie crust in my food processor with flour, baking powder, salt, butter, vegetable shortening and ice water.  Form into a disk and allow to chill for 30 minutes.

While the chicken finished roasting and dough chilled, I prepped my other ingredients. I cut a few slices of thick cut bacon into lardons and rendered out the fat. I pulled out the crisp bacon and added a few tablespoons (ok ok, it was a stick of butter....but I ran two miles so I needed the calories....) and let it melt. I sauteed two cups of chopped yellow onions in the butter and bacon fat and then added about 3/4 cup of flour to that and it cook for about two minutes.  I added about 5 cups of warm chicken stock that had been warming on the stove and then added the chopped carrots, potatoes, pearl onions and peas.  By this point the chicken was out of the oven and cooling so I pulled the meat off the bones by hand and added it to the mixture. Finally I added about 1/2 cup of cream and the crispy bacon back into the mix.

I pulled out my ramekins and filled each one to near full with the chicken, veggie and sauce mixture. I rolled out the pie crust and cut it into rounds just larger than the pie crust.  A brush of beaten egg around the rim of each ramekin and then I placed the crust on top, crimping the edges so it would stick.  A quick brush of egg wash over the crust, some kosher salt and fresh ground pepper and 3 small slices with a knife into the top to let out the steam. Into a 375 degree oven for an hour to bubble and bake.

And then finally? It's time to eat.  I curled up on the couch with my pot pie, a Gritty's brown ale and caught up on the DVR I had missed while away at a database conference this week. Was it work? Yes! Was it worth it? Hell's yes!

While I ate Meatball perched on the edge of the couch with his whiskers twitching as he sniffed the deliciousness.  And it gave me great pleasure to look at him and say "No Kitty! This is MY pot pie!"

So here's today's question: What's your favorite fall indulgence? Is it a warm apple pie baked with fresh picked apples? A thick and hearty chowder? Meatloaf and gravy? Post in the comments below and let me know what your own autumn culinary adventures will include!
Posted by Maryanne at 12:08 PM