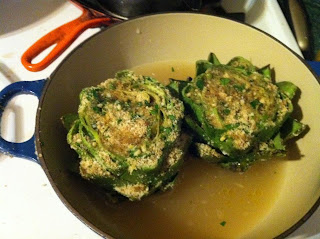 The other day I posited a question on Facebook that asked who the heck was the first person to look at an artichoke and say "Gee, I think I'll eat that."  I got all sorts of answers back like:


"..the same person who looked at a cow's udder's and said I want to drink what comes out of that..."
or
"...Same person who saw shellfish...."
But somehow those at least seem a little more intuitive to me. Watch a baby calf suckle and you can pretty much guess what comes out of there is nutrition of some sort.  Look at a clam or a muscle and you can at least guess that what's in there might be tasty.  The artichoke, with its spiny leaves and fuzzy choke must have taken some serious work - but whoever it was - I say a great big thank you!

Artichokes have always been one of my favorite all time special occasion side dishes.  When I was little, every holiday meal whether it was Thanksgiving, Easter or Christmas always had stuffed artichokes.  And every holiday, about a week or two before whatever holiday it was - Mom and Dad would be out grocery shopping and Dad would point out that the artichokes would be $1 each and would try to get Mom to pick them up early. And every year for every holiday Mom would chastise Dad because you can't buy artichokes early! You have to get them just before you're ready to cook them or they'll turn black! So when the actual day for the big holiday shop came around, they would come home not speaking because Mom had the gall to pay sometimes up to $4 or $5 each for artichokes. As we sat down to eat whatever meal it was, be it lamb for Easter, turkey for Thanksgiving or fillet mignon for Christmas (and lest you think my family somewhere became "American" this is after the antipasto, soup, macaroni, gravy meat, etc....) Dad would turn a mild shade of purple and ask "Is it a good artichoke? It's a $5 artichoke you're eating. Don't choke on it....

Now the best part of the artichoke for me is always the heart. Don't get me wrong - I love scraping the meaty portion off the leaves and catching some of the garlicky cheesy stuffing with it. But the best part is when you get down to the heart. The tender, meaty, extremely flavorful heart. When I was little, Mom and Dad would give me their hearts because they knew how much I loved them. As I got older, I began to share my hearts with them. In some ways, it almost felt like a right of passage. But my favorite artichoke story has to do with my Aunt Judy and my Grandpa.  Now you have to understand that every time this story gets told the table gets a little bigger and the fork a little longer.... But the general story goes that one Sunday, Aunt Judy was over the house for dinner and had been patiently working her way through an artichoke, pulling and scraping the leaves. Finally, she got to the heart! All of a sudden from across the table (which has ranged in the story from a 4' table to over 19' away depending on how much wine has been consumed during its telling....) came my Grandpa's fork stabbing the heart, sweeping it off the plate and Grandpa saying "...you didn't want that did ya kid?"  Well, needless to say Judy never quite got over that. To this very day, I believe if there's an artichoke on the table, she'll guard it with her life. And heaven help you if you go for her heart.  I once nearly got a fork in the back of the hand trying the same move and learned pretty quickly to stick to my own artichoke!

Over the years, a lot of people have asked me how I make my stuffed artichokes. Well, I do it the way my Mom does it, who did it the way her father did it, who did it the way his sister (my Aunt Ida of cookie fame) did it, who did it probably the way countless cooks in our family have done it for years. What I'm about to give you are approximations - I prefer a LOT of grated cheese and garlic in my stuffing but you can adjust according to your own tastes. The important part in this is to make sure your stuffing is flavorful and that your artichokes are fully cooked so the leaves are super tender and pull easily from the base.

Clean your artichokes by slicing off the stem (leaving a flat base) and slicing off the top portion of the artichoke (about an inch or so). Reserve two of the stems for the stuffing.  Remove the smaller, tough leaves from the artichoke and then give the whole thing a rinse under running water.  Make sure to get in and open the leaves while you're doing this to a) rinse out any grit that may be in there and b)give yourself an opening for the stuffing.  I find that placing the artichoke cut side down on a board and pressing gently with the heel of my hand in a circular motion really helps to open the leaves.

At this point, you can either use my method and with a grapefruit spoon scoop out the choke from the center of the artichoke (covered in purple spiny leaves with a soft fuzzy white portion underneath - you should note this is NOT edible and you can in fact choke on it) - or you can use my Mother's method and let each guest remove the choke when they get to the heart. Your choice of whether you want to work harder or have your guests work harder.

After you have cleaned each artichoke, place it in the bowl of acidulated water while you move onto the next one to prevent it from turning brown.  Leave the artichokes in the water while you make the stuffing.

Combine all of the ingredients from bread crumbs through the salt and pepper. Drizzle in enough olive oil to just moisten the stuffing a bit. You want it to resemble wet set not be a sopping mess.

Take an artichoke and shake out the water.  Stuff it with a quarter of the stuffing making sure to really get the center (especially if you've removed the choke) and also in between each of leaves. I find that I sort of pour it on, then run my hand over the top to get it down between the leaves and do that a few times until it's really packed.  Repeat with the remaining artichokes and place them in a pan (with a tight fitting lid). The snugger the fit of the artichokes the better here. Pour the chicken stock and water around (NOT OVER) the artichokes) and drizzle about a tablespoon of extra virgin olive oil over the tops of each. Cover and cook over a low flame for about 45 minutes to an hour, basting the artichokes with the liquid about every 15 minutes or so.

You'll know they're cooked when a) the house smells so unbelievably good you can't stop yourself from reaching into the pot and tearing off a leaf or two and b) when you do this and the leaves come out super easily and are very tender.

If you want to serve this as an appetizer course, once they're cooked, remove them from the pot and place on a sheet tray. Top each with a good portion of the shredded mozzarella and a little extra grated pecorino romano, then place under the broiler for about 5 minutes to melt and brown the cheese. Watch carefully as I can't tell you how many things I've set on fire using the broiler!

It's a lot of work I admit, so you can see why it's mainly only a special occasion food! But I can't tell you how worth the effort they truly are.  Just be sure to guard your hearts!
Posted by Maryanne at 10:41 AM