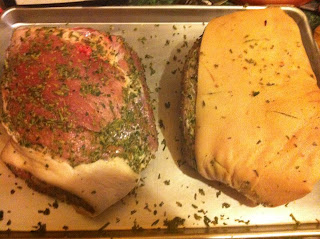 Porchetta! What is it? A suckling pig being deboned, stuffed with aromatics and then slow roasted until delicous perfection that is rumored to have originated in the Lazio region in Italy and quickly spread with the aromatics changing from one region to the next. In Rome you'll find rosemary and garlic, in Umbria they use fennel and in Sardinia fresh myrtle leaves are the flavor of choice. To me, just the word itself sounds delicious and lately I've just been dreaming about it. So hence, the great Porchetta experiment began.

Before the experiment began I had to do some research to figure out my preferred cut of meat, cooking method and seasoning mixture.  To start with - what cut of meat would I use? There were a variety of methods on the internet using everything from a boneless pork loin (sometimes wrapped in a pork belly or bacon) to a bone-in shoulder to an entire pig. And while I admit I have been positively dying to do a pig roast it probably wouldn't be the best option for my smallish New York City kitchen. (umm...anybody with a big backyard dying to let me dig a firepit? Please?) So ultimately, I decided I'd use a bone in shoulder. I really like roasting meat on the bone for added flavor and moistness. Plus the shoulder has that lovely layer of fat and wouldn't require the addition of wrapping it in bacon making it simpler to prepare. The cuts of meat I had were also fairly even in thickness so I didn't have to tie them either. 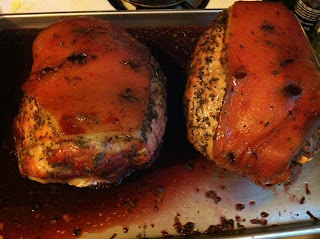 So how would I flavor my meat? Almost all recipes I looked at called for a pretty standard mix of garlic, rosemary, thyme and sage. I also added a small amount of chili flakes and a few tablespons of fennel seed that I lightly toasted in a dry pan along with 5 crushed juniper berries. None of this was measured - I guessed at most of the ratios and just let my nose tell me when enough was enough.  Instead of chopping everything I threw it in my food processor with some extra virgin olive oil and plenty of salt and pepper and pulsed it to a coarse paste. I made several short but deep slits around the shoulder stuffing a small amount deep into the meat as well as shoving some of it under the skin as well. The rest got smeared all around the outside of the shoulder. This sat for about 30 minutes before going into the oven.

Next decision was the cooking method. Would I start it high and then decrease to low? The reverse? Tent it? Not tent it? Dutch oven? So many options. Again - I went with what was simple. The meat would go on a rimmed sheet pan and dry roast for about two and a half hours at 300 (perfect time for a nap on a Sunday afternoon). After the two hours, I added a cup of red wine and half a cup of water to the pan and  let it roast for another 3 hours. I basted every 30 minutes or so with the juices, occasionally having to add a bit more wine as the liquid evaporated. Then, when the meat was fork tender I increased the temperature to 450 for about 12 minutes to melt the rest of the fat and crisp up the skin. Many recipes that started the porchetta in a super hot oven also had the added note that you'll be cleaning your oven for days afterward. This method produced much less mess - which for me is great as I can't say I enjoy the prospect of 3 days with a can of easy off and brillo. Doesn't matter how good the meal was! 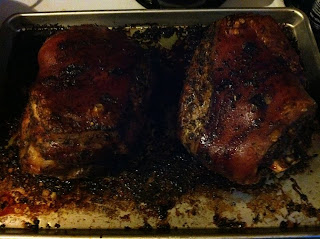 To go with the pork, I did some fairly traditional sides. I blanched a mixture of hearty greens (kale, dandelion and turnip greens) in salted water, then squeezed out the excess liquid.  I heated a few tablespoons of olive oil in a large skillet, 3 cloves of sliced garlic and a good amount of red pepper flakes. When the garlic was just starting to brown and get amazingly fragrant, in went the greens for a minute or two, then I added about a pound of fresh spinach and let that cook down with the rest of the greens (the spinach is much more delicate than kale and dandelion and would have probably disintegrated from the double cook). A bit of salt and a squeeze of fresh lemon juice before serving to brighten the whole thing up.

I also prepared some creamy white beans which are one of my favorite sides with roast meat of any sort. Instead of soaking the dried beans I just brought the water up to a boil and then let them simmer for about two hours (this was for one standard size grocery bag of beans).  When they were mostly soft, I drained them, put them back in the pot with chicken stock, 4 large cloves of garlic, one large sprig of rosemary chopped finely and lots of salt and pepper. As the beans cooked they continued to soak up liquid so I had to continually add chicken stock to get them to the proper consistency. By the time the pork was done, the beans were soft, garlicky and super creamy having produced their own velvety sauce. Actually - there was so much garlic in this meal that if there were a coven of vampires anywhere near Inwood they are most definitely and decidedly gone by now.

The only problem with this meal was that I had no idea how many people to expect.  It could have been 2 or 30. So I ended up with rather a large amount of food and some very overstuffed friends. One shoulder would have been enough - definitely didn't have to go with two. But I sent my guests home with doggie bags and will have plenty for leftovers this week. The fun part is that the meat itself will be pretty versatile - lending itself to leftovers such as chopped bbq pork sandwiches, pork & vegetable stir fry, possibly some fried rice and maybe even enchiladas! If I grow a curly tail by the end of this week you'll know why! 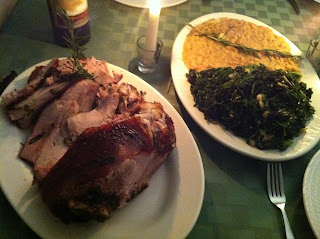