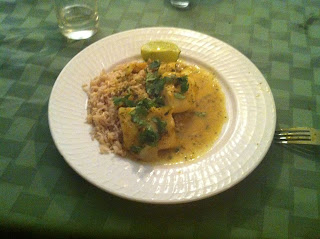 Sometimes you need to get out of your comfort zone and try something new. Culinarily speaking, my comfort zone is traditional Italian American food. This could be something ultra heavy like a lasagna or chicken rollatini or cannoli - or - it could be something like light a zuppa di pesce, lemon chicken or zabaglione with fresh fruit. (Ok, maybe zabalgione isn't exactly light but you get my drift...).

But every once in a while, I like to try something different. Last night was one of those nights. I had a friend coming over for dinner and we had decided on fish earlier in the day. Most of the time for this particular friend I'll make a simple grilled or poached halibut with a salad or green vegetable. This time I wanted something different. Part of my CSA share for the week included a good stock of basil and cilantro and the combination just screamed Thai at me.

One of the major negatives about shopping in New York City is that the price of fish is astoundingly high. I went to one of my favorite mid-priced markets (no Whole Foods this time) and was perusing the counter to see what was fresh but wouldn't bust my wallet. The Chilean sea bass was as gorgeous as it is unsustainable and was a whopping $26.99 per pound (you can visit the Monterrey Bay Aquarium's Seafood Watch here to learn about the best and worst choices for sustainable seafood). The pacific halibut was $22.99 per pound and wasn't as attractive as it should have been, looking slightly off white and a bit slimy.  And then I saw a big sign for "Boston Cod" for $8.99 per pound that apparently was line caught (at least that's what they told me) which makes it a much better option than fish harvested by trawl methods that are incredibly damaging to the environment.  Having finally made my selection I then proceeded to drive the fish monger crazy to find me a solid one pound piece that was of even thickness. I'm pretty sure he was glad to see me go after that...

I picked up a few other sundries and headed to the northern tip of the world (aka home) to begin my adventures.

I started by throwing about 1/2 cup of cilantro (stems and leaves) and 1/3 cup of basil into the food processor with one small onion, one garlic scape (you could substitute one clove of garlic here) and the rind of a whole lemon. To that mixture, I added 1 tablespoon cumin, 1 tablespoon turmeric and 1/4 teaspoon of cayenne. If I had ginger I would have added that too but unfortunately I had none of either the fresh or dried variety. I processed that, scraping the bowl down a few times until I had a dry paste.

Meanwhile, I heated my cast iron skillet over medium heat (which is possibly the best gift my parents have ever given me...aside from the gift of life and my KitchenAid Mix Master that is...and of those two the higher value is extremely debatable...). To the skillet, I added about 1 tablespoon of vegetable oil. When the oil was hot I added about two rounded tablespoons of the spice paste mixture and let that cook for a minute or two. As the spices hit the hot oil the explosion of aroma in the kitchen was heady and intoxicating. Yes...we were definitely onto something here...

The fish (which I had cut into about 3" pieces) went into the pan and was cooked for about two minutes in just the spices and oil. Then I added 1 cup of lite coconut milk, 1/2 cup of chicken stock (you can also use vegetable stock, fish stock or clam juice here), lowered the heat to a simmer and let the fish cook through - about another 5 minutes or so. After, I removed the fish to a warm plate and added a few glugs of soy sauce and about a teaspoon or so of fish sauce to the liquid in the pan. Cranked the heat up to high and let it all reduce down to a beautiful velvet sauce for about 8 minutes. When the sauce was ready I added the fish back in just to heat through and immediately turned it off.

When we sat down I was admittedly nervous as I can be about trying something new - particularly on a person who...well...can be a bit picky about food to say the least. His clean plate at the end of it told me my worries were for naught! This recipe is definitely a keeper! Hmm...I wonder if I can somehow turn it into a ball? :)
Posted by Maryanne at 10:58 AM